Tweet
This is post is the second in my series on Sharon Street's article "Constructivism about Reasons". In this article, Street tries to offer a systematic statement of the constructivist thesis.

In part one, we covered the questions addressed in Street's article and the approach she takes to answering them. We also covered the phenomenon of restricted constructivism in some detail.


1. Six Observations on Restricted Constructivism
In part one, we gave a formal account of restricted constructivism. This account highlighted the five key ingredients to the restricted approach and then showed how these ingredients were used in the work of John Rawls and Thomas Scanlon.

To give an example, our judgment that slavery is immoral is correct because it is something to which free and equal agents would agree when negotiating a social contract from behind a veil of ignorance.

Six observations can be made about the restricted position:

Keep these observations in mind because we will be considering them again after we have developed a fuller account of metaethical constructivism.

The obvious question is: where does this process come to a halt? That question will be answered at the very end of this series. For now, we will focus on the differences between metaethical constructivism and metaethical realism.

The constructivist thinks that our ability to pass normative judgment on certain activities is derived from our ability to value things. Indeed, valuing things is the essential feature of being a practical agent. That is: an agent who reasons about what he should and should not do. Thus, according to the constructivist, the values that we have depend for their existence on the fact that we value them.

That statement captures the primary distinction between realism and constructivism. The realist argues that moral values are mind-independent. So even if we didn't value them, they would still exist and they would still be valuable.

To support this claim, analogies are the key weapon in the realist armoury, analogies with mind-independent scientific and mathematical facts being the one's with most firepower.

Who is right, the constructivist or the realist? Street proposes the following thought experiment to answer that question. 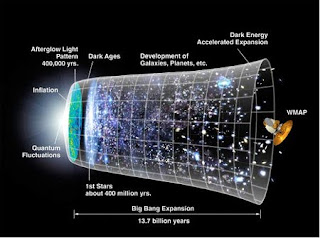 Let's suppose that two such creatures came into existence on the same day. Creature 1 valued its own preservation and reproduction; Creature 2 valued its own destruction. We can call these primitive or non-instrumental values. No prizes for guessing which of these creatures' basic valuing-structure has been passed down to us.

In this sense, value is mind-dependent.

Nevertheless, once these creatures had values it was possible for them to make normative errors of judgment. This is because their non-instrumental values entailed a set of instrumental reasons and it was possible to be mistaken about those reasons.

For instance, because Creature 1 wished to survive, he had reason to eat food and to do whatever was necessary to find food to eat. Creature 1 had these reasons-for-action even when he was not aware of them. They arose solely from the fact that he valued his survival. A similar analysis could be applied to Creature 2, as is illustrated below. 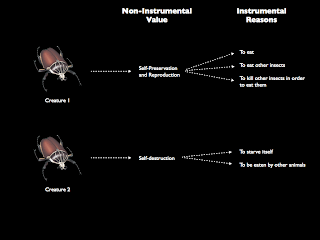 The important points arising from this thought experiment are the following. First, values are not mind-independent. Second, once there are creatures capable of valuing things, there is a possibility of making a normative error.

The key challenge facing the constructivist is the status of the primitive or non-instrumental values. Nowadays, it seems perfectly possible for us to question whether or not they are valuable. How does this become possible and what does it mean?

Obviously, this creature will be inclined to affirm the following proposition "My survival is valuable". But it is not a done deal since he must check to see whether that proposition is entailed by his other primitive value.

When he does the necessary checking, he is likely to still affirm the proposition. After all, his offspring may well depend on him to provide them with food, shelter and protection. Thus, if this creature woke up one morning and said "my life is no longer valuable" he would be mistaken: this judgment does not withstand scrutiny from the perspective of his other values.

The situation quickly becomes complex. Modern human beings will have hundreds of values, some of which may be mutually incompatible. Nonetheless, the constructivist argues that the basic process of scrutinising one set of normative judgments in light of another is the correct way to go.

This formal definition implies that moral truth is always relative to some other set of normative judgments that the agent holds. This means that although there are objective moral facts, they are not absolute.

Actually, that last point is disputed. Kantian constructivists will argue that there are some values that must be affirmed by all practical agents. These values, if they exist, would be absolute.


The one thing missing from this is the materials that go into the constructivist procedure. The materials are the reasons-for-action that flow from the grounding set of normative judgment. Street argues that they are absent from metaethical constructivism because it is supposed to account for all moral reasons.
Anyway, c'est tout for this post. In the next part we will take a closer look at the idea of "withstanding scrutiny".
Posted by John Danaher at 9:46 PM