Tweet
In a previous two-parter, I had the opportunity to run through Sharon Street's take on the metaethical claims of constructivism. In this series, I will go into those claims in more depth and tease out some of strengths and weaknesses of metaethical constructivism.

As per usual, I am basing all of this on an article. And once again the author of the article is Sharon Street. The article is entitled "Constructivism about Reasons" and in it Street valiantly attempts to flesh out the constructivist account of moral reasons.

This article could well be her most important work to date -- it is certainly the best of the three I have read -- so I want to give a fairly detailed exposition of its key points. This will, of course, be spread-out over several posts.

In this post, I will do two things. First, I will try to give an overview of the article: what questions does it deal with and how does it deal with them? And second, I will cover the concept of restricted constructivism. This is something I covered previously, but the discussion here will be more elaborate and, with luck, more informative. 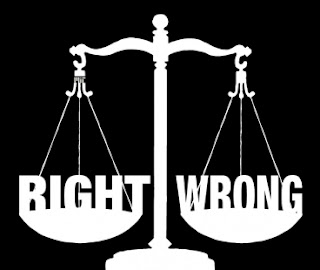 But what are these normative judgments really? What do they mean and how do they fit within the ontological structure of reality? These are the questions at the heart of metaethics. In a previous post, I gave a short description of three approaches to this topic.

Street's article offers a systematic statement of the constructivism approach. According to this approach, normative judgments are ontologically constituted by the fact that they withstand scrutiny from the practical point of view. That is: from the point of view of an agent who is in the business of asking and answering practical questions.

This may seem a little opaque right now, but perseverance should lead to clarity. The first step is to get a feel for the overall structure of Street's article. The article has two major components, each of which is in turn broken down into a set of sub-components.

The first component deals with the topic of restricted constructivism. This is an approach that is popular among political theorists; it's most common form being that of the social contract. Street identifies the five key ingredients of the restricted constructivist approach and shows how they are used in the work of John Rawls and Thomas Scanlon. She closes by making six observations about these theories.

The second component deals with metaethical constructivism. Unlike the restricted variations, this approach adopts some definite positions on the nature of moral truth. Street explains the approach in detail, highlighting its similarities and differences to the restricted approach.

In the remainder of this post I will provide the general outline of restricted constructivism, describing its five key ingredients in the process, and applying this to the work of some leading constructivists.


2. The Ingredients of Restricted Constructivism
As mentioned above, the central constructivist claim is the following:

So suppose we are concerned with the correctness of our judgments about the propriety of abortion. In particular, suppose I think that abortion is morally permissible. Am I right to think this? The constructivist answers that question by assessing whether the judgment is consistent with my other normative judgments.

So suppose I also believe that the ability to exercise autonomy over our bodies is a moral good. I can say,  with good conscience, that this judgment entails my judgment about abortion. But what if I have other normative judgments about the sanctity of life that would not entail my view about views? Ah well, therein lies the rub for the constructivist. We will need return to this problem later.

To be more formal, there are five key ingredients to restricted constructivism. They are: 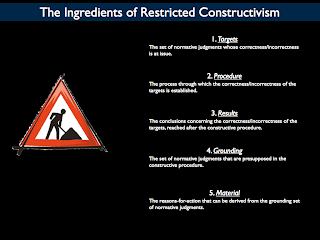 I personally find Street's distinction between 4 and 5 to be unclear and feel they could be combined into one ingredient. But I will try to stick with her characterisation in spite of my confusion.

To better understand the significance of these ingredients, we need to see how they are used in the work of the leading restricted constructivists. Street looks at two such theorists: John Rawls and Thomas Scanlon. 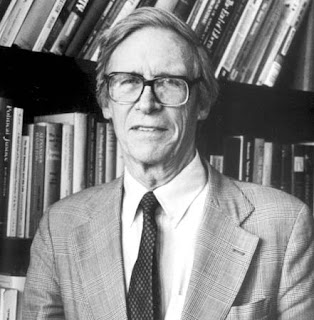 3. Rawls's Constructivism
John Rawls is widely acknowledged as the most influential political theorist of the 20th century. He developed a comprehensive framework for judging the moral acceptability of social institutions. Rawls's work, from A Theory of Justice in 1971 to Political Liberalism in 1993, is avowedly constructivist in nature.
The five ingredients to Rawls's theory are as follows:

Rawls is pretty clear that his philosophy takes no stance on the deeper nature of moral truth. He simply assumes that people will have reasons to participate in society and to think of themselves as free and equal. These reasons could derive from secular or religious moral traditions. It does not matter. Rawls's goal is merely to specify the system of social justice that follows from these reasons.
Indeed, Rawls thinks the lack of commitment to a deeper metaethics is a virtue of his approach: it makes it more acceptable within a pluralistic democratic society. But it also robs his philosophy of the moral spine it needs to withstand objections from those who do not think we are free and equal. 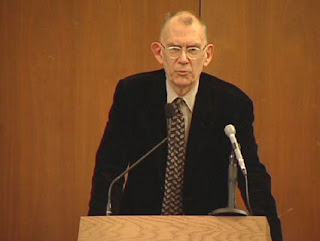 4. Scanlon's Constructivism
Thomas Scanlon, although less influential than Rawls, is a highly respected moral and political philosopher. His 1998 work What we Owe to Each Other sets forth a restricted constructivist account of moral duties and obligations.
The five ingredients are as follows:
Hopefully this gives some idea of how restricted constructivism works. Again, the basic idea is that one set of normative judgments (targets) is entailed by another (grounding) via a specified procedure.
Okay, we'll leave it there for now. In the next post we will make six observations about restricted constructivism and use these as a springboard for developing a thoroughgoing or metaethical constructivism.
Posted by John Danaher at 12:22 PM