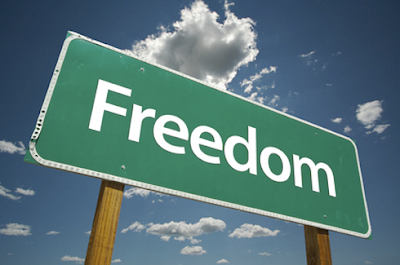 Freedom is an important ideal in liberal political theory, but what exactly does it entail? What do we have to do in order achieve the ideal of political freedom? How will we know if we have achieved it? The first step to answering these questions will be to provide some concrete conception of what it means to be free.

Not all external constraints are of equal importance when it comes to political theory. Indeed, the general view is that natural constraints (e.g. the absence of oranges) are less significant in the political sphere than constraints originating from the will of others (e.g. you pushing the glass out of my reach). If possible, we should do all we can to remove these kinds of constraint: no one should be impeded by the will of another, unless, perhaps, it is necessary for some greater good. Despite the general consensus on this matter, there are still divergences of opinion about what is required to eliminate these constraints.

The Hobbesian conception of freedom suggests that what is required is non-frustration of the will. This conception originates in a quote from Hobbes's most famous work Leviathan:

[A] freeman is he that, in those things by which his strength and wit is able to do, is not hindered to do what he has will to.


In other words, you are free if you are not frustrated in doing the things that you want to do. To state this more definitively:

Freedom as Non-Frustration: A person is free so long as he/she is not hindered in doing the things that he or she wants to do (i.e. so long as his/her will is not frustrated)


This conception of freedom has several interesting implications, one of which is particularly important in the present context. It implies that external constraints are only relevant to freedom when they affect the decisions you actually make, not the ones you might have made, in a different possible world.

That this is a problem was recognised even in Hobbes's day (I don't really know why I say "even"; it's not as though people living in the 17th century were incapable of philosophical insight). Bishop Bramhall, one of Hobbes's chief critics, presented a counterexample to this aspect of Hobbes's theory that resonates today. He asked us to imagine a man who thought about playing tennis with his friend but then decided against it. Suppose, however, unbeknownst to the man, he could not have played tennis with his friend anyway, because someone had stolen his racquet or locked the gate to the tennis court. The question then arises: is this man free?

This example bears many similarities with the so-called Frankfurt cases that permeate the free will and moral responsibility debate today. And, indeed, the analysis proposed by Bramhall is similar to that of the contemporary critics of Frankfurt. Bramhall argues that although the man in the example is not frustrated in the expression of his will -- he decided not to play tennis after all -- he still not truly free. He has had an option removed that he might have otherwise taken.

The Berlinian conception of freedom of non-interference takes up the torch from Bramhall's critique. It holds that political freedom requires more than simply non-frustration; it requires non-interference as well, where non-interference is understood as the openness of options across multiple possible worlds. To give this a canonical definition (or at least canonical for the purposes of this post):


Berlin explained this conception of freedom with an analogy. The analogy asked us to imagine options or choices as doors that we can push upon. It then stated that freedom as non-frustration demanded only that the doors we wish to open will open when we push upon them; whereas freedom as non-interference demanded that the doors would open for us, whether we chose the push upon them or not.

It is important to realise that "interference" in this account is understood broadly. I interfere with your choices if I somehow remove or impede your access to them. But this can arise in a variety of ways. For example, I could penalise your choices, manipulate them, deceive you about certain outcomes or simply threaten you. Each of these things could count as interference.


2. The Adaptation Argument
Which conception of freedom is to be preferred? Bramhall's counterexample provides some reason to doubt the non-frustration conception, but it is far from definitive. A better argument, which was endorsed by Berlin, is based on the problem of preference-adaptation. The claim underlying this argument is that freedom as non-frustration cannot be a satisfactory account of political freedom as it leads to the absurd conclusion that one can increase one's freedom by adapting one's preferences to match the preferences of those who are dispositionally inclined to interfere with one's decisions.

Pettit offers a six-step, formal presentation of this adaptation argument. I don't really like his formulation, but since it is in the source material for this post, I feel it incumbent upon me to re-present it here. So here it is:


I think the thrust of this argument is relatively clear, but an example might help to underscore it. Imagine you are a prisoner and I am a prison-warden. You know that I would stop you if you tried to escape, so you adjust your preferences in a such a way that you are happy to stay in prison. Consequently, you are not frustrated in what you want to do, but surely you cannot be said to be free in any important sense. Adapting your preferences is not enough for that.

There is one important qualification to this. Preference adaptation cannot make you more free where you use it to eliminate an option from consideration; but it can make you more free if you use it to increase the number of options available to you. Pettit gives the example of someone who doesn't like to go hiking at the weekends, but adapts their preferences in order to be able to spend time with their friend who goes hiking every weekend. There is nothing freedom-undermining about adaptation in this cases.

The adaptation argument helps make the case for Berlin's preferred conception of freedom as non-interference. That conception would, after all, block the absurdity in question: you as a prisoner would not be free since I am blocking your access to an option you might have otherwise chosen. And yet, surprisingly, contemporary defenders of freedom as noninterference sometimes seem to slip back into the notion of freedom as non-frustration. Pettit cites the example of Robert Goodin and Frank Jackson in this regard. In their article "Freedom from Fear", these authors make the case for a conception of negative freedom that is built around the idea of maximising expected non-interference (or, what is the same thing, minimising expected interference). What these authors neglect is that one can minimise expected interference by adapting one's preferences as well as by removing sources of interference.

Consequently, Pettit thinks the lesson of the adaptation argument is an important one, one that we would do well to remember: political freedom requires more than just the ability to fulfill your preferences. Nevertheless, he doesn't think that Berlin's preferred conception is fully satisfactory. It too is vulnerable to a reductio-style objection. We will consider this objection in the next post.
Posted by John Danaher at 8:14 PM