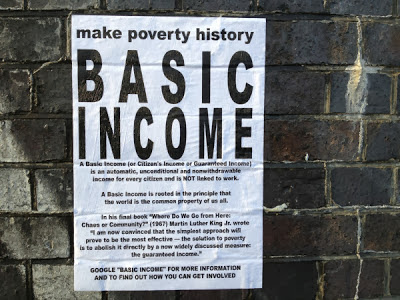 This is the third, and final, part in my series on libertarianism and the basic income. To quickly recap, the universal basic income (UBI) is a proposal for reforming the way in which welfare is paid, moving away from a selective and conditional system of payment to a universal and unconditional one. Libertarianism is a political philosophical associated with the individual rights, the celebration of the free market, and the minimal state.

As noted in part one, the UBI seems to be incompatible with libertarianism. If there is one thing that libertarians tend to oppose, it is the coercive redistribution of income. The UBI would seem to require this. But as we also noted in part one, this doesn’t quite give us the full picture. Libertarianism is a family of political philosophies, some of which accept the permissibility of some degree of coercive redistribution.

In part two, we saw how this could provide the basis for a libertarian argument in favour of the UBI. The argument was drawn from the work of Matt Zwolinski. It rested on two premises. The first claiming that coercive redistribution could be obligatory if we adopt a justificatory approach to classical liberalism. The second claiming that the UBI has a number of practical advantages over selective forms of redistribution. This argument was not without its problems, several of which were noted at the end of part two.

In this part, we are going to look at another libertarian argument for the UBI. This one derives from the work of Peter Vallentyne and is grounded in the left libertarian school of thought. Left libertarians share the general libertarian desire for a robust system of individual rights, the promotion of the free market, and the minimisation of the state; they simply add to this a concern for equality, which they feel is justified by certain conceptions of libertarian rights.

To understand Vallentyne’s argument we will have to do three things. First, and very briefly, we will have see how he thinks coercive redistribution can be justified on libertarianism. Second, we will have to discuss the Lockean conception of rights and the so-called Lockean proviso. Third, we will have to show how these elements can be used to build a case for the UBI. As we shall see, Vallentyne has a tough time showing why a UBI is preferable to selective forms of redistribution. But his goal is, like Zwolinksi’s, a modest one. He wants to show that the UBI is possible on libertarianism, not that it is actually required.

Libertarians are usually quite big on freedom of contract. But contracts typically require enforceability. If I make a promise to pay you X amount of money before next Tuesday (in return for some sufficient consideration from you), I should be held to that promise. I have a moral duty to do so. This is where legitimate coercive redistribution comes into play. If I do not pay you the money, then I can be rightly coerced into doing so. But this, of course, requires the coercive redistribution of money from me to you.
So, in other words, individuals may have a moral duty to make payments to others, and those payments may be coercively enforced under certain conditions. Interestingly, Vallentyne doesn’t think that this justifies the existence of a state per se, but does think it justifies the existence of something similar to a state, i.e. some institution that can enforce moral duties.


2. Lockean rights and the Lockean Proviso
So are there any moral duties requiring the redistribution of income across individuals in the libertarian state? Vallentyne says that there are, if we approach it from a Lockean perspective. John Locke was a famous British philosopher who developed an influential account of “natural rights”. These are rights that inhere in the individual, and are pre-political and non-acquired. For what it’s worth, I am deeply sceptical about the existence of such rights, and I think many questions can and should be asked about their origins and foundations, but I’m going to suspend my scepticism here. Instead, I’ll assume the Lockean conception of rights and follow Vallentyne’s argument wherever it may lead.

The Lockean conception of rights has two elements. The first, and more widely known, holds that everybody has a right to self-ownership and to ownership of the fruits of their labour. As Locke puts himself:

[E]very Man has a Property in his own Person. This no Body has any Right to but himself. The Labour of his Body, and the Work of his Hands, we may say, are properly his.

The earth, and all that is therein, is given to men for the support and comfort of their being. And tho' all the fruits it naturally produces, and beasts it feeds, belong to mankind in common, as they are produced by the spontaneous hand of nature; and no body has originally a private dominion, exclusive of the rest of mankind, in any of them, as they are thus in their natural state: yet being given for the use of men, there must of necessity be a means to appropriate them some way or other, before they can be of any use, or at all beneficial to any particular man.


A serious debate within libertarian theory is whether there is any “fair use” constraint on the appropriation and ownership of those natural resources. Are we free to plunder the natural world for our own benefit? Or must we ensure that enough if left over for others? Some libertarians think that there is no fair use constraint; some think that there is. Locke himself seems to be in the latter camp, issuing his now famous proviso:

The Lockean Proviso: You have the right to appropriate natural resources only up to the point that there is “enough, and as good, left in common for others”.


The language used here — “enough, and as good” — is terribly vague. Nevertheless, it gives us exactly what we need for Vallentyne’s argument to get off the ground. For what we have here is the basis for a moral duty to redistribute one’s income to someone else. Thus, if I take more than my fair share of the natural resources, I am obliged to compensate those who lose out, redistributing some part of the gain I have made to them. What’s more, following the previous section, this obligation can be rightfully and coercively enforced by something resembling the state.


3. From the Lockean Proviso to the UBI?
So we have the first condition for the argument. What about the second? There is an obvious problem. No doubt you’ve spotted it already. The Lockean proviso provides a basis for selective redistribution, but not for universal redistribution. After all, the motivation behind the Lockean proviso is to compensate for the gains made by those who breach the fair use constraint. That requires selective redistribution, doesn’t it? Maybe, but Vallentyne argues that the UBI is still a possible a way of enforcing this constraint.

Vallentyne develops this argument by looking at a number of different interpretations of the Lockean proviso. As I noted above, it is unclear exactly what is required to make sure that “enough, and as good” is left for others. Different libertarian theories propose different answers. For ease of exposition, I’m only going to look at one — the Nozickian interpretation. For the others, you’ll have to read Vallentyne’s paper.

According to the Nozickian interpretation, to satisfy the requirements of the proviso we have to make sure that no one is made any worse off by another’s appropriation of natural resources, than they would have been if those resources have not been appropriated (and hence left in “the commons”). Let’s use a simple example, involving a model state with two citizens, A and B. Suppose both A and B appropriate a portion of the natural resources and make some use of them. A’s usage imposes a £100 loss on B (i.e. B is £100 worse off than s/he would have been if the resources had been left in the commons); but at the same time B’s usage imposes a £50 loss on A.

Following the logic of the proviso, in this highly simplified world, some redistribution of income needs to take place. Specifically, we need to end up in a world in which B has £100 and A has £50. This will require some system of tax-and-transfer. Vallentyne draws a distinction between the following two systems:

Gross system: Both A and B pay the gross amounts of their gains over one another into a common fund (i.e. £150 goes into a common fund). The proceeds of which then get distributed to them in accordance with the requirements of the proviso, i.e. A ends up with £50 and B with £100.

Net system: A and B only have to pay the net amounts of their gains over one another into a common fund. The proceeds of this will then get distributed to them in accordance with the requirements of the proviso. In this instance, this means that A will pay £50 into the common fund, and B will receive a payment of £50 from the common fund.


Both systems accomplish the same end, but the important thing from our perspective is that there is something like a UBI under the gross system. In that system, each citizen gets a basic income grant of £50. B then gets an additional top-up. Vallentyne goes on to show how the same argument can be applied to other interpretations of the Lockean proviso. In each case, there is a gross and net system of payment; and in each case the gross system of payment amounts to a UBI. For example, it could be that a minimally decent standard of living is required by the proviso, hence under a gross system, a UBI grant that is sufficient to meet that standard must be paid to each citizen.

This is certainly an interesting argument, but it is quite weak. It shows that a UBI is possible on certain forms of libertarianism, but not that it is preferable to selective forms of welfare. Indeed, the gross system of redistribution seems quite convoluted when compared with the net system. At least, it certainly seems like that in the simple two-person state. In a more populous state, things might be different. This is where Zwolinski’s argument from part two could play a role. If it could be shown that the gross system of redistribution is less invasive, more efficient, less costly etc., then we really could have a libertarian case for the UBI. That’s an argument that needs to be developed in much more detail.


4. Conclusion
That brings us to the end of this series. As we have seen, although the UBI and libertarianism appear to be incompatible, there are ways to bring them together. If you are the type of libertarian that accepts the legitimacy of some degree of coercive redistribution, and if you think the UBI has decisive practical advantages over selective forms of redistribution, then you should consider supporting the UBI. To do that though, you would need to read up on the UBI and the different practical mechanisms for funding and implementing it. If you are interested, I would suggest reading Basic Income: An Anthology of Contemporary Research.
Posted by John Danaher at 1:40 PM