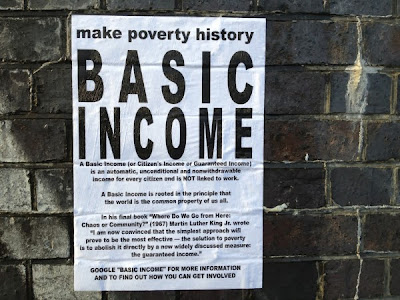 This is the second part in my series on libertarianism and the basic income. The universal basic income (UBI) is a proposal for reforming the way in which welfare is paid. It is thought to be radical because it is paid to everyone, regardless of their work status, or other sources of income. Libertarianism, on the other hand, is a political philosophy associated with robust negative and property rights, the promotion of the free market, and a minimal state.

But as we also noted in part one, libertarianism is a family of political philosophies, some of whose members may be more compatible with the UBI than others. In his article, “Classical Liberalism and the Basic Income”, Matt Zwolinski takes advantage of this interfamilial diversity. He argues that the classical liberal school of libertarianism could be rendered compatible with the UBI. In this post, we’ll look at his argument.

Based on my limited reading, this seems broadly correct. Classical liberalism has its origins in early economic thinkers like Adam Smith. It is committed to a minimal state, but usually on the grounds that this is the most mutually advantageous system of government. This is clear from the work of more recent defenders of classical liberalism like Hayek, Friedman and, to a lesser extent, Epstein. These thinkers tend to be drawn to their views from a foundation in economic theory, which is concerned with aggregate levels of social well-being.

Anyway, in the remainder of this post I will do two things. First, I’ll look at Zwolinski’s argument for the basic income. Second, I’ll look at the various limitations and objections to that argument.

It would be easy for Zwolinski to reach this modest goal if he focused on consequentialist justifications of classical liberalism. After all, consequentialists are in principle open to pretty much anything — you just have to show them that it leads to better consequences. Fortunately, Zwolinski’s aims are a little bit higher than this. He tries to show how the UBI is compatible with a justificatory approach to classical liberalism.

The justificatory approach is founded on the notion that the default position in society is that individuals are free to act in defiance of coercive moral demands from others. Or to put it another way, every individual is of equal moral authority: I do not have the right to coerce you; and you do not have the right to coerce me. To move away from this default position, and to impose coercive moral demands on others, we must justify those demands to the individual in terms of moral reasons. This is often cashed out in consequentialist or self-interested terms — i.e. the system of coercive demands that is justifiable is the one that is mutually advantageous — but not necessarily so. All that matters is that the moral reasons are capable of being endorsed by the individual.

So how does this provide a foundation for the UBI? Here is Zwolinski’s argument. I’ll outline it in spare, somewhat formal, terms initially, leaving the more substantive comments until afterwards:


Premise (3) is just stating the obvious and can be safely ignored here. The other two premises require some elaboration and defence.

Premise (1) is defended in the following manner. Although a classical liberal state is the one that is most likely to be mutually advantageous (or appropriately justified), it may have certain imperfections. For example, the gains from free market exchange and a robust system of property rights may accrue to some at the expense of others. Additional redistributive mechanisms may then be needed to compensate those who lose out. Just to be clear, we are not embracing egalitarianism here: we’re not saying that individuals must share equally in the gains of trade. We are simply saying that some degree of compensation may be required in order to make the system as whole justifiable.

That’s relatively okay. Premise (2) is where all the main problems are located. If we accept the need for some level of redistribution, we may well ask why it shouldn’t be selective and conditional in nature. After all, the motivating concern here is that some people are losing out relative to others. Surely, we just have to compensate them and not everyone else as well? Yes, but a universal and unconditional system — such as the UBI — may have a number practical advantages over selective systems of redistribution. Zwolinski mentions two in his article:

Minimises State Intrusion into Private Life: Selective systems of redistribution, as are common in many countries around the world, often require substantial and expensive bureaucracies in order to be administered properly. For example, if the goal is only to provide assistance to those who are below a certain income threshold, we will have to engage in means-testing and other forms of surveillance and monitoring to ensure that the right people are getting the right amounts of money. Universal and unconditional payments are much easier to administer. Since classical liberals care about minimising state interference, they may consequently see the UBI as being preferable to selective forms of redistribution.

Avoids Public Choice Problems: The bureaucracies associated selective systems of redistribution have a tendency to expand over time and for their workers to engage in rent-seeking. This is due to the general social problem that actors within institutions, and institutions within governments, do not always have the same interests as those who set them up. Classical liberals would like prevent this from happening and so, once again, may be drawn to the administrative simplicity of the UBI.


Given those practical advantages, premise (2) can be supported. This then gives us the classical liberal argument for a UBI.


2. Limitations and Objections
That’s just the in principle case for a UBI. It faces a number of limitations and objections. In terms of limitations, the main one highlighted by Zwolinski has to do with the size of the income grant that would be justified by the argument. Since the classical liberal concern is to compensate for losses (to the degree needed for justification), and not to ensure equality or anything close to that, it is likely to justify a relatively small income grant. This will be disappointing to many of the more traditional supporters of the UBI. In terms of objections, two are discussed by Zwolinski, one which he thinks is serious, the other which he thinks is manageable.

We’ll deal with the more manageable objection first. This has to do with exploitation and free-riding. A major concern within the classical liberal tradition to prevent people from unjustly gaining from or exploiting the hard work of others, and to incentivise economic production. Consider the entrepreneur who assumes the risk of starting a business, puts in all the hard work, becomes wildly successful, only to have all his/her profits taken away and distributed to others. This is a nightmare from a classical liberal perspective: it saps the motivation needed for beneficial free market exchanges, and it unjustly rewards others. Isn’t there are danger that the UBI does something similar? Since the grant is not conditional upon effort or inclination to work, it may encourage exploitation of this kind?

Zwolinski has two responses. First, he points out that the UBI will only be supported by reference to what is needed in order to justify the political regime. This implies that some people will have a legitimate moral claim to the redistributed income. Second, although there may be some cost in terms of exploitation, this must be weighed against the other benefits of the system, which are: (i) its ability to address a serious moral wrong; and (ii) its ability to minimise state intervention when compared to other systems of redistribution.

The more serious objection, at least from Zwolinski’s perspective, is the impact a UBI might have on immigration policy. If a UBI is paid to all citizens (or all legally recognised residents) it is likely to fuel anti-immigration lobbying, and hence to encourage the government to adopt a more restrictive immigration regime. Zwolinski thinks this would be bad. It would encourage nationalism and other forms of racial or ethnic prejudice; it would limit cultural diversity; and, most importantly, it would negatively impact on those for whom migration is a path to a better life.

Of course, the problem identified by Zwolinski could be addressed by adopting a truly universal approach to the UBI, but that’s undoubtedly an unrealistic policy in the short-to-medium term. In the meantime, any country that unilaterally introduces a UBI is likely to face the kinds of pressures envisaged by Zwolinski. There’s certainly enough anti-immigration sentiment out there. This would indeed be a problem.

Okay, we’ll leave it there for now. Hopefully from this entry you can see how a libertarian case for the basic income can be built. You simply have to marry together a fundamental moral principle for the organisation of the state (the justificatory principle) with the practical (bureaucracy-minimising) properties of the UBI. In the next entry, we will look at a slightly different argument. This one coming from the left libertarian school of thought and based on a Lockean conception of rights.
Posted by John Danaher at 8:37 PM