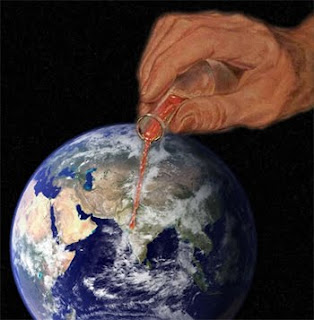 I am currently working through Chapter 13 of the book. This chapter deals with the potential contradictions inherent in the concept of an omnipotent being. Everitt surveys five possible definitions of omnipotence and checks them for inconsistencies.

We closed the last part by looking at the third definition of omnipotence:

Applied to God, this definition means that God's power must be consistent with his freedom, knowledge and moral perfection. In a different series of posts, we ran into some of the problems with this definition.
Everitt raises similar objections.
1. God's Omnipotence is Relative to Time
Some things are only logically possible at particular moments in time. If we assume that God is in some sense temporal (either totally or just in his relations with human beings) then his power would limited by ordinary temporal processes. For example, it would have been possible for him to prevent the 2004 Indian Ocean tsunami back in 2004, but not in 2006.
If this reasoning is correct, we get a fourth definition of omnipotence:


So now God's power is relativised to both his nature and to time. Does this leave us with a coherent conception of omnipotence?
Not really, as Everitt notes, once you start relativising your definition of omnipotence in this manner you open up the possibility of many omnipotent beings. Indeed, every being is omnipotent relative to some identifiable set of constraints. This would seem to make a mockery of the notion of an all-powerful being. (This was discussed previously)
The mockery becomes apparent if we consider the following reductio.


This being would count as omnipotent, if we were to follow definitions 3 and 4. This is clearly absurd. So those definitions must be inadequate.
2. A Final Possibility
What can the theist do to avoid this absurdity? Everitt considers one final definition:


The final clause seems to avoid the absurdity of the nullipotent being, but it does so at the expense of creating further problems with the concept of omnipotence.
First, there is the measurement problem. The definition assumes that we have some readily-available metric for comparing the relative strengths of the capacities possessed by different beings. This might be true if all beings could obtain the same capacities (e.g. X, Y, Z) and one being had more or less of them. But if beings have distinct sets of capacities, e.g. {X, Y, Z} vs. {R, S, T} commensurability becomes an issue.
Second, and more seriously, it would imply that God, as traditionally conceived, is not omnipotent. To see this, compare God with Semigod. God has all the traditional divine properties. He is morally perfect, all-knowing, all-present, and so on. Semigod has all the traditional properties save one: he is not morally perfect. God, due to his moral perfection, could not commit a morally evil act; Semigod could. It would then follow, from definition 5, that Semigod is omnipotent and God is not.
One doubts whether that would be palatable to a traditional theist.
3. Conclusion
What have we learned from this exploration of omnipotence? Clearly, we have learned that omnipotence is a tricky concept. The most natural definition -- Definition Two -- becomes problematic when applied to a being who fits with the traditional conception of God. And the subsequent "relativised" definitions seem to lead to absurdities or to the unappetising conclusion that God is not omnipotent.
The one possible solution -- canvassed in part three -- would be to develop a sound argument for a logically necessary God. This would be a version of the ontological argument. Whether such an argument is possible is a question for another day.
In the meantime, the following diagram summarises the five definitions of omnipotence covered in this series, as well as some of the problems associated with them. 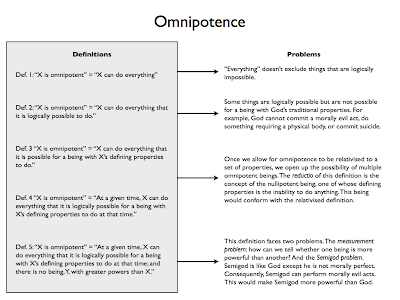