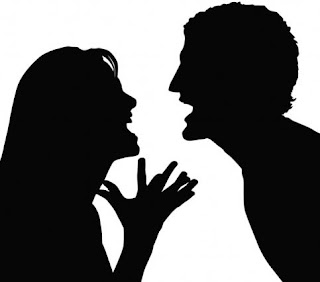 This post is part of a brief series on Graham Oppy's article "Disagreement". The article provides an overview of the epistemology of disagreement and considers its application to cases of religious disagreement.

In part one, I introduced the basic concepts and motivating questions behind the epistemology of disagreement. As we saw, the key question is "What is the rational response to cases of disagreement between doxastic peers?". A doxastic peer is someone who has the same cognitive capabilities, and access to the same information, as you do.

In this part, we consider some examples of disagreement. The examples provide some instruction as to how to answer the key question. However, one of Oppy's key points is that while clear cut answers might be possible in uncomplicated hypothetical examples, once we get closer to real-life cases of disagreement things become much less clear-cut.


1. Cases in which you should adjust your beliefs
We begin with four cases of disagreement in which it would seem rational to change your original belief. They are:

Why would it be reasonable to alter the degree of confidence you have in your belief in these types of cases? What do these cases have in common?
Well, they involve people with equal experience and epistemic access to the domain in which the disagreement takes place and, further, that domain is the kind of domain in which even experts may occasionally get things wrong. So it would be strange to assume that one's original judgment must be correct. 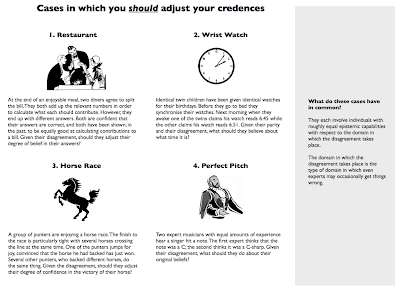 2. Cases in which you should not adjust your beliefs
We can contrast the examples just given with the following cases. In these cases, adjustments seems less rational:
Why would adjustment be irrational in these cases? What do they have in common?
Well, they would seem to involve cognitively basic judgments. That is, judgments about immediate perceptual experience, personal memory or elementary math and logic. These are not the kinds of judgments we expect to be mistaken about. 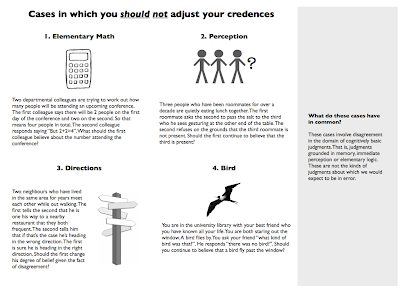 3. More Problematic Cases
Those cases were relatively straightforward. The following cases are more tricky because they involve complex judgments about complex topics. It is not clear what should be done in these cases. 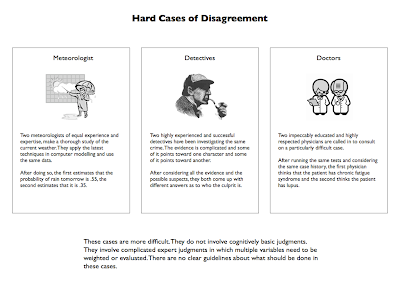 We might worry about whether the experts in these examples are really peers since it would be difficult to determine if they have the exact same experience, ability and evidence. Still, they are close to serious, real-life cases of disagreement. How we respond to these types of disagreement can be significant.
As can be seen in the following case:
If you are following their judgments, what should you do when they disagree? That depends on whether you want to get at the truth or avoid error. If you want to get at the truth you would be better off following one of the judges (since you will then be right 95% of the time). But if you want to avoid error, you should suspend judgment. 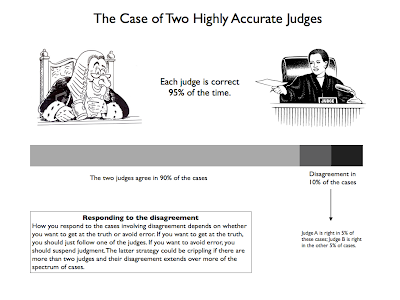 In the criminal law, the goal is usually thought to be to avoid error. The famous English jurist William Blackstone once observed (I'm paraphrasing) "'tis better for 10 guilty men to go free than for one innocent man to be punished." The problem is that this could be crippling. For imagine if we had several experts, who are usually right, but disagree across a broad spectrum of cases. In that event, we would have to suspend judgment in nearly every case.

In the next part, we will move on to consider religious disagreement.
Posted by John Danaher at 3:54 PM