Draper on God and Evil (Part One) 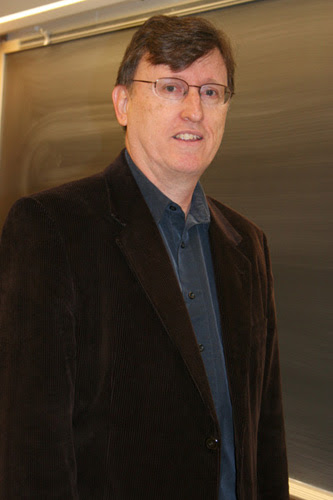 Paul Draper delivered the Plantinga lecture last October. The lecture was effectively a sneak preview of his forthcoming book the Evidential Problem of Evil (according to his webpage). The text of the lecture has been made available online and I wanted to go through it over the next few posts.

As with all of his work, Draper’s lecture is both thoughtful and thought-provoking. It is also, on the face of it, quite humorous in places. Of course, it’s difficult to say how these things go over in person as opposed to on the page, but I can certainly say that some of the philosophical in-jokes elicited a wry smile from me as I read them.

Anyway, down to business. Draper’s lecture is entitled “God and Evil: A Philosophical Inquiry”. Unsurprisingly, it presents a basic argument against theism by focusing on a particular datapoint relating to evil. To support this argument, heavy use is made of an analogy drawn from a classic scientific dispute over the nature of light.

In this first part, I’ll outline the analogy, I’ll present Draper’s basic argument, and address some of the terminology he uses.


1. Poisson’s Spot
The analogy brings us back to the early 19th Century and a debate about the nature of light. At the time, there were two dominant schools of thought on the issue. According to one of these schools, light was a wave (call the relevant theory “wave-ism”); according to the other school, light was a stream of particles (call the relevant theory “particle-ism”). Neither theory seemed to have a decisive advantage over the other with respect to the data at the time.

All that was about to change. In 1818, a young scientist named Fresnel submitted work on wave diffraction to the French Academy of Sciences as part of a competition. Diffraction is what happens to a wave when it encounters an obstacle. One of the judges in the competition, Poisson, realised that Fresnel’s work could be used to confirm particle-ism over wave-ism was true (Poisson was a believer in particle-ism).

Poisson deduced that if a light was shone at a circular disc, then, if the wave theory were true, one would expect to see a single spot of light in the middle of the shadow cast by the disc. If the wave theory was false (as Poisson thought) no such spot should be visible. As fate would have it, the experiment actually confirmed the existence of the spot. The experiment is illustrated below.

Without getting too embroiled in the details, there are three important points arising from this story. First, there are two competing theories that seem, relative to one set of data, roughly equally probable (wave-ism and particle-ism). Second, there is a particular datapoint that seems to confirm one theory over another (the presence of Poisson’s spot). And third, there is the apparently reasonable conclusion that, as a result, wave-ism is more likely to be true than particle-ism.


2. Draper’s Basic Argument
The three features just alluded to are crucial to understanding why Draper discusses the example. His argument against theism, although certainly more complex, turns on a very similar pattern of reasoning. Once again we have two theories (naturalism, theism) which are symmetrical with respect to one set of data; we have a particular datapoint (existence of evil) which seems to confirm naturalism over theism; and we have the seemingly reasonable conclusion that naturalism is therefore more likely to be true than theism.

There are also some differences between the two cases that come to the fore in Draper’s subsequent analysis. Two differences seem worthy of mention at the outset: (i) Draper claims that naturalism is simpler than theism and thus has higher a priori probability; and (ii) it’s much more difficult to assess the respective merits of theism and naturalism.

This leads Draper to formulate and defend the following argument:


This is illustrated below. As you can see, I’ve placed a gap between the premises and the conclusion. This is because, as Draper acknowledges at the end of his lecture, the inference is not as straightforward as you might think. 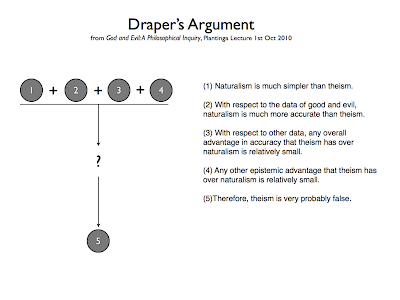 Obviously, to make this argument in any way compelling, Draper needs to support each of its premises. Unfortunately, he doesn’t do all the necessary work in his lecture, he saves that for his forthcoming book. But he does sketch defences for (1) and (2) and offer some comment on (3) and (4). We’ll go through these in the subsequent posts.


3. Naturalism vs. Theism
Before we do that, we need to clarify some of the terminology employed in the argument. As can be seen, Draper is comparing naturalism and theism. But what do these respective hypotheses mean? Draper begins to answer this by noting that concrete reality seems to consist of a private, mental, subjective world, and a public, objective, physical world. He then drafts the following breakdown:

Naturalism: The view that the public, objective, physical world has ontological priority over the private, mental, subjective world. In other words, the view that the mental can be explained in terms of the physical.

Theism: A sub-type of supernaturalism according to which the physical world was brought into being by a single, omnipotent, omniscient, and omnibenevolent mental entity.

Note here that theism is defined as a specific type of supernaturalism that makes specific claims about the type of mental entity responsible for the creation of the physical world. This turns out to be significant later in Draper’s argument. It is probably worth asking at this stage whether there are more specific versions of naturalism too. Presumably there are (e.g. single-universe vs. multiverse theories). This might be significant as well.