This post is part of a brief series on Paul Draper’s Plantinga Lecture “God and Evil: A Philosophical Inquiry”. In previous entries, I set out the basic structure of Draper’s argument, summarised the analogy he uses to illustrate some of his key points, and considered his defence of the first premise of his argument. In this entry, I focus on Draper’s defence of premises (2), (3) and (4).


1. The Defence of Premise (2)
The second premise of Draper’s argument is:


There’s nothing too surprising about Draper’s defence of this premise. Anyone who has read his classic 1989 article will be familiar with the basic contours of his thinking on this matter.

In his lecture, he defends the premise by telling a story about two alien scientists who come to earth: Natty, the naturalist, and Theo, the theist. As they investigate the world, these two aliens acquire more and more data about good and evil. As they do so, they will try to make predictions about what they will learn about the conscious beings (those capable of experiencing pain or harm) who inhabit the earth.

Of course, Theo can respond to both of these examples by playing the skeptical theist (ST) card. He can claim that he doesn’t know of all the entailment relations that can hold between possible goods and evils and that it is possible that God has some sort of “beyond-our-ken” reasons for allowing what we observe.

There are two points to be made about this kind of response. First, it does nothing to undermine premise 2. Anyone who adopts the ST-response must tacitly admit that naturalism is more accurate with respect to the data on good and evil. Second, at best this kind of response can be used to protect the other epistemic and evidential advantages that theism might have from being undermined by the data on good and evil. The problem is that ST might not be very successful in doing this. Indeed, it may come with significant epistemic costs of its own. This would actually have the effect of strengthening premises (3) and (4) of Draper’s argument. (I have written about these problems extensively on this blog).

A theist could also appeal to a theodicy in response to the problem of evil. Draper does not explore this possibility in his lecture, but suggests (maybe jokingly) that he will in his forthcoming book.

To sum up, Draper seems to defend premise (2) of his argument in the following manner:

The skeptical theist can interject here:

But this can be responded to as follows:

All of which gives us the following addition to our original argument map. 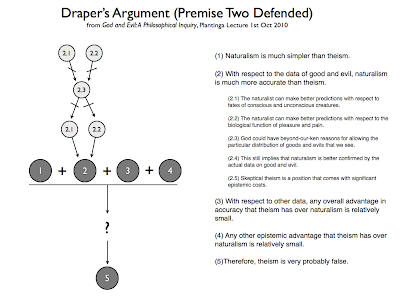 2. Defending Premise 3 and 4
Premise (3) of Draper’s argument states the following:


As Draper notes in his lecture, this premise is crucial and yet incredibly difficult to defend (or, indeed, reject). It suggests that in order to properly evaluate the success (or failure) of the problem of evil we must be able to say that theism and naturalism are roughly equally probable with respect to other available data (or, better, any advantage that theism might have must be outweighed by the disadvantage is has with respect to the existence of evil).

It’s difficult to say anything more conclusive about that here.

Let’s move on then to premise (4), which states:


Draper notes that there are several interesting routes that an objection to this premise could take. Perhaps fittingly, he focuses in his lecture on the Plantinga-style objection. Plantinga argues that we have non-inferential knowledge of theism thanks to the presence in us of a special faculty called the sensus divinitatus. He also argues that the knowledge provided by this special faculty might function as a defeater to any inferential or evidence-based justifications of naturalism.

Before adding these points to the argument map, I should note that Draper goes on to suggest that (4.5) might not be that strong an objection since monotheism seems to survive defeaters better than animism or polytheism. 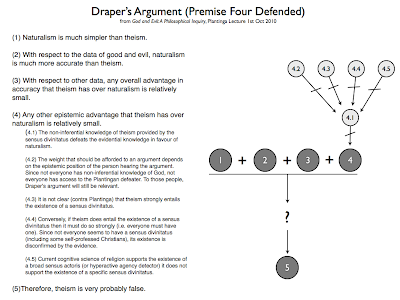 3. Does the Conclusion follow?
This brings us nearly to the end of Draper’s lecture. There’s just one last piece of business to wrap up. As noted in part one, the conclusion of Draper’s argument is as follows:


This conclusion does not follow straightforwardly from the premises. Draper shows that there is some further argumentation needed to justify that conclusion. The reasoning is roughly: