As we saw the last day, the basic argument for substance dualism relies on two premises. The first of those premises derives from the axioms of identity and is relatively uncontroversial. The second of those premises makes a modal claim. It says that we (i.e. minds/persons) can exist without bodies. This claim is controversial and is supported by two equally controversial arguments: (i) the conceivability-possibility argument; and (ii) the essential property argument. Both were discussed in part one. Now we turn to the criticisms of both those arguments.

1. What can we actually conceive?
Let’s focus on the conceivability-possibility argument first. As we know, this argument has the following form:


There are obviously two points of attack here: premise (2.1) or premise (2.2). We’ll take these in reverse order.

In the initial presentation we assumed that these examples really did involve the conception of a mind existing without a body. This time round we need to be more critical. Have we really thought about each example in sufficient and vivid detail to be sure that we can conceive of our own existence without the presence of a body? This is a serious question: if our imaginings are superficial and vague, we may only be conceiving of the partial absence of a body not its complete absence.

Consider the annihilation example (see description in previous post) and ask yourself: can you really conceive of yourself watching your body being annihilated? How do you suppose you receive the necessary visual input? Can you really imagine receiving it without any eyes?

Buried amongst these rhetorical questions we have our first attack on (2.2):


Substance dualists can respond by saying only clear and distinct conceivability counts. This is acceptable but in that case it’s much less obvious that examples of the sort presented in the last post pass the test of conceivability.


2. Is the Conceivable really Possible?
Let’s turn our attention to premise (2.1) now. This premise proposes that conceivability is a reliable guide to possibility. Is this correct? Can our imaginations really tell us what obtains in different possible worlds? Well, it all depends on the type of possibility we are concerned with. Conceivability might be a reliable guide to some forms of possibility and not to others.

Jaworski orients his discussion around three types of possibility:

Physical Possibility: P is physically possible if and only if P is consistent with the laws of physics.

Metaphysical Possibility: P is metaphysically possible if and only if P is consistent with itself.

Conceivability is likely to be a poor guide to technological and physical possibility. Both concepts depend heavily on the current state of our empirical knowledge. We can’t now conceive of the technology that will cure cancer (if we could, we would simply invent it) but we might in the future be able to conceive of it. Likewise, being able to conclusively say that something is physically impossible depends on knowing all the laws of physics. But every physicist knows there are gaps in the current laws that need to be filled. It is empirical discovery, not a priori thought experiments, that flesh out our understanding of technological and physical possibility.

What then of metaphysical possibility? This is the brand of possibility to which the substance dualist appeals. Can he or she say, definitively, that non-material existence is possible solely on the basis of a thought experiment?

If the independency of mind and body were simply a logical or analytical truth, the substance dualist might be home and dry. But this need not be the case. For there is a third type of metaphysical possibility that does seem to depend on empirical evidence. The classic example is the identity relation between “water” and H2O. This is thought to be a metaphysically necessary relation, but one that was only established through empirical investigation of the referent of the term “water”. (see Twin Earth thought experiments for more). If the relation of mind and body is like that of water and H2O, then a priori methods are insufficient to prove what needs to be proved.

So we come to the crux of the problem for the substance dualist:


3. The Essential Property Argument
We turn now to the criticisms of the essential property argument. As we recall, the argument looked like this:

Premise (2.3) is unobjectionable; premise (2.4) is more dubious. Last time out, we saw that there were two methods for establishing what counted as an essential property and what counted as an accidental property: (i) the conceptual method and (ii) the empirical method. The former was used by the substance dualist and was the basis on which (2.4) was reached.

It is time to call that method into question. Continuing with the line of thought established above when looking at metaphysical possibility, we can argue that conceptual thought experiments are an insufficient test for whether a property is essential or accidental. The water example can be called to assist us in making this point: a purely conceptual analysis would not have revealed that the essence of water is H2O -- empirical investigation was needed for that. Discovering the essential properties of persons or minds might require similar empirical investigation.

We can summarise these three criticisms as follows:


The completed map for all the criticisms of the second premise of the substance dualist argument can now be drawn up. 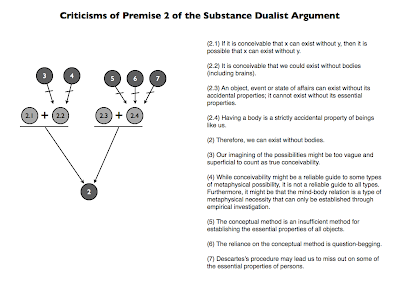 4. Moving forward
To this point in the discussion we have been focused on the basic argument for substance dualism and rebuttals to it. In the next post, we’ll start to consider the reasons for thinking substance dualism is false.
Posted by John Danaher at 8:00 AM