Substance Dualism (Part Three): The Problem of Other Minds

Substance dualism has been preoccupying me over the past week. In the two previous posts, I've looked at the basic argument for it, as well as the criticisms of that argument. In this post, I'll consider the first of three arguments against substance dualism: the argument from knowledge of other minds. Once again, William Jaworski's excellent book

1. Introduction to the problem
Jim and Pat are housemates. Jim is sitting in the kitchen one afternoon when Pat arrives home. He has been out jogging. Seeing Jim, Pat gestures vaguely at the sink before placing his hands on his knees and starting to pant. Jim understands. He takes a glass from the cupboard, walks over to the sink, and pours Pat a glass of water. Pat takes it and thanks Jim.

What has just happened? Put simply, Jim read Pat's mind: he inferred that Pat desired a glass of water from Pat's body language. There's nothing unsurprising about this either: Mind reading exercises of this sort would appear to be a commonplace.

But these commonplaces create a problem for the substance dualist. The problem can be expressed in terms of the following argument:


I would expect premise (1) to be the major bone of contention here. So developing a more persuasive argument in its favour is our first port of call.


2. The Argument for Premise One
Why is the substance dualist committed to premise (1)? The answer has to do with the presuppositions that make mind-reading possible. For Jim to infer Pat's state of mind from his behaviour, he has to assume that there is some consistent connection between physical indicators such as body language and the mind. We could call this the assumption of the "mental code". The problem is that the substance dualist cannot assume the existence of such a code.

To see why this is the case, we have to remember the ontological commitments of the substance dualist. They believe that mental entities can exist without any physical substrate or grounding; and that physical entities can exist without any mental accoutrements. This, as you recall, is one of the key premises of their basic argument. But it has the unfortunate consequence that there need not be a mental code because it implies that there is not necessarily a consistent connection between physical indicators and mental states.

This gives us the following argument

3. The Substance Dualist Response
The substance dualist is far from finished. Certain responses are available to him or her. For starters he or she can accept premise (1) and dispute premise (2). After all, our primary grounds for accepting premise (2) are a combination of intuition and tradition, neither of which would seem a reliable guide to truth. So we could easily reject premise (2).

But look at it this way: (2) is part of our intuitive, pre-theoretical worldview. We can, indeed, cast off elements of our pre-theoretical worldview, but only if we have compelling reasons to do so. For instance, that heavier objects fell faster than lighter objects might have seemed obviously true at one point in time. But we now have compelling reasons - both logical and empirical - for rejecting that belief. The question is whether similarly compelling reasons can be offered in favour of substance dualism. We have already evaluated the basic argument and found it somewhat lacking. So hanging onto premise (2) would seem like the better bet.

We can spell out this little exchange as follows:


Are there any other responses available to the substance dualist? Indeed there are.

Go back now to premise (1). We offered what seemed to be a persuasive argument in its favour, but that argument may have made some unwarranted assumptions. Two in particular seem relevant.

First, we assumed that the only way to know the minds of others was through inference from observed physical indicators. The dualist can argue that there are others ways in which to acquire knowledge of other minds. They could argue that individual minds are directly linked to one another in the manner envisaged by proponents of ESP. This is a difficult claim to evaluate but it would appear problematic. For starters, the evidence on ESP is patchy at best. And what’s more, even if some people have ESP, it’s pretty clear that others don’t. I know, for example, that I don’t but I still think I can, on occasion, know what other people are thinking by inferring it from their physical behaviour. So it would seem like the problem will remain even if ESP is a reality. Let’s formulate some premises on this:


Second, we assumed that, in the substance dualist worldview, all possible relations between the mental and the physical were equally plausible. This need not be the case. The dualist could argue that we have good evidence for thinking that the one-mind-for-every-human-body-relation is the most plausible. How so? Well, you know that that relation applies to you so you can, by inductive inference, argue that it holds for all human bodies. But this won’t do. Inductive inferences are only warranted if the inference is made from a reasonable sample size. A sample of one would seem insufficient. 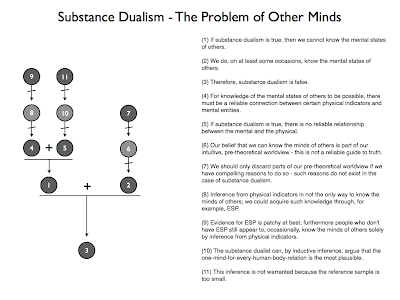 4. Conclusion
The problem of knowledge of other minds is a serious one for the substance dualist. They are not entitled to assume the existence of mental code because of their ontological commitments. Furthermore, although our knowledge of other minds would seem to be part of our pre-theoretical worldview - and so, not necessarily true - we would need compelling reasons for casting it off. The substance dualist has not yet provided them.
Posted by John Danaher at 8:00 AM