This is the second part in a brief series on Joshua Thurow’s article:

This is part of a broader series of posts on evolutionary debunking arguments (EDAs). These arguments claim that if a belief-forming faculty is the product of a process that does not track the truth with respect to the relevant class of propositions, then any beliefs produced by that faculty are unjustified.

Although he does not use the terminology of the EDA, Thurow’s article is very definitely a contribution to the burgeoning literature on this topic. As we saw in part one, he focuses specifically on the implications of so-called by product theories of religious belief formation. According to these theories, religious beliefs are by-products of cognitive faculties that have evolved for other purposes. The classic example being the HADD-theory, which maintains that belief in divine agency is the product of a hyperactive agency detection device.

Thurow’s goal in the first two-thirds of his article is to present a robust version of a religious belief debunking argument based on the by-product theory. I introduced his first version in the previous entry. Things seemed to be going well for this version: it had been challenged from a couple of different directions and appeared capable of withstanding the assault.


1. Problems for the Reliability Test
The version of the debunking argument discussed in part one proposed the following test for the reliability of a belief-forming process:


This reliability test impugns the HADD since it would produce belief in God or gods even if such beings did not exist. The test has already survived one type of criticism, but Thurow thinks there is another type of criticism that it does not seem to survive.

The criticism employs an analogy with mechanical or computational devices created by human beings. Thurow points in particular to the example of an astronomical device that gives us the locations and distances to all the planets and moons in our solar system. This device is programmed by human beings who have solid evidence for all the relevant coordinates and distances. As a result, we who use the device will trust in what it tells us and it looks like we are within our epistemic rights to do so.

But here’s the problem: the device whose outputs we are trusting does not pass the reliability test proposed by Thurow. Once again, if it turned (perhaps per impossibile) out that the planet Mars was not in the location specified by the device, the device would still specify that location. This is because the device is not sensitive to real world changes. Nevertheless, it seems like our trust in the device remains warranted because it was designed in accordance with sound design principles.

The analogy is apt because according to theists we are in a similar position with respect to our own belief-forming faculties. They, after all, believe that these faculties were designed by God, a being who surely knows of his own existence and can reliably program us to believe in his existence. And we, therefore, can be justified in believing in his existence

This, of course, echoes the Plantingan position.


2. Responding to the Objection
What are we to make of this objection to the reliability test? Maybe very little. When it comes to the astronomical device, our trust seems warranted because we know that the designers of such devices rely on sound principles and evidence. When it comes to our own cognitive faculties, we know no such thing.

Imagine if you came across a device, carelessly strewn on the heath, which purported to give you the locations and distances to all the planets and moons in our solar system. Upon closer investigation, you discover that the device takes no inputs from the external environment (e.g. no telemetry from satellites), that it just produces outputs in the form of the information described. Should you trust such a device? Maybe. But only if you had independent means of confirming or validating its results.

It seems like we are in a similar position when it comes to belief in God as produced by the HADD. We just have a device, that produces a particular kind of belief as an output (even in cases where the object of the belief is absent). So unless we have some independent means of verifying or confirming the reliability of that output, we have nothing that would count as the basis of a warranted belief.

It’s important to see that this response does not lead to global scepticism. Thurow is not claiming that we should only trust the output of our innate faculties when we have independent evidence for the reliability of those faculties. He is claiming that in the specific case where we have a faculty that produces a belief in X even when X is not present, we should suspend judgment about the reliability of such a faculty.


3. A New Argument
All of the preceding discussion leads Thurow to draft a new version of the debunking argument. He calls it the “CSR (Cognitive Science of Religion) Process Defeater Argument”. It looks like this (note: I’ve reordered the premises and added an intermediary conclusion to the version that appears in the Thurow’s article): 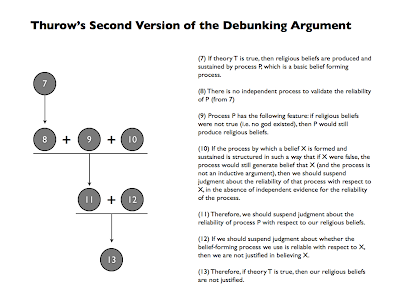 Most of this argument makes sense in light of the preceding discussion. Premise 10 now states the new reliability test and adds the qualifications that result from the challenges and objections to the original version. Premise 12 seems like a sensible epistemic principle: one cannot justifiably believe in something about which one must suspend judgment. And the overall conclusion does indeed seem to follow.

So have we done it now? Have we constructed a watertight debunking argument based on the cognitive science of religion? The answer is “no”; there is another line of objection that undermines this version of the argument. We’ll see what it is in the final part.
Posted by John Danaher at 11:28 AM