Substance dualism is an enduring theory within the philosophy of mind. According to substance dualists the mind is ontologically distinct from the body.

With the rise of neuroscience in the 19th and 20th centuries, the theory appeared to become less tenable: the evidence seemed to point, overwhelmingly, toward a deep connection between mind and brain. But despite the continued presence of this evidence, a satisfactory theory of mind-brain relations remains elusive. As a result, my current sense is that substance dualism may be due to undergo something of a recrudescence. Thus, those of us with an interest in the philosophy of mind would be well-advised to understand the arguments that can be mustered in its support.

Fortunately, William Jaworski, through the medium of his recent book Philosophy of Mind: a Comprehensive Introduction

, is on hand to assist. I’ve mentioned and recommended this book before. In this post, I will run through Jaworski’s presentation of the basic argument in favour of substance dualism. In future posts, I’ll consider the various criticisms and responses to this argument.

1. The Basic Argument for Substance Dualism
As is the case with many of the most intractable philosophical arguments, the argument for substance dualism can be stated with admirable brevity. [Note: In the argument “we” just means “persons or minds”]:


As Jaworski notes, this is often called the modal argument for substance dualism. It garners this name because it appeals directly to the possibility of a mind or person existing without a body. Possibility is, of course, a modal concept.

The argument as stated is valid, but its two premises are in need of support.


2. The Argument for Premise 1
The first premise makes a simple identity-based claim. As such, it is relatively easy to defend it by appealing to the axioms of identity.

So if x and y are identical, they must be the very same object, event or state of affairs. In that case, x cannot exist without y. Why not? Because to say that x exists but y does not would be to deny the identity relationship that was originally presumed.

To lay this out more formally:


Jaworski notes that there is nothing to really dispute in this line of reasoning. So if there is a problem with the substance dualist argument, it is unlikely to be found through a critique of premise (1). Premise (2) must be where all the action is. And there are two arguments in its favour to be considered.


3. The Conceivability Argument for Premise 2
Premise (2) states that it is possible for the mind (for “us”) to exist without the body. But how can we say this with any confidence? One way would be to rely on a conceivability-possibility principle (a “CP” for short). A CP states, roughly, that if it is conceivable that x is true (or false) then it is also possible that x is true (or false). Since premise (2) relies on a claim about what is possible, a CP can then form the basis of the following type of argument in its favour:


We won’t be evaluating this argument right now (we’ll leave that ‘til the next post), but we do need to ask what kind of examples can be adduced in support of (2.2). Jaworski identifies three:

(2.2.1) The Afterlife Example: Many people can conceive of themselves existing after they die (this is true even of those who don’t believe in the afterlife). But once they die, the physical body is destroyed. Therefore, in order to conceive of the afterlife these people must tacitly conceive of their existence without their bodies.

(2.2.2) The Annihilation Example : Imagine you are watching yourself sitting reading your computer screen through some security camera feed. Now imagine that the body you see sitting reading the computer is instantaneously annihilated and you are left staring at an empty chair. You are now conceiving of yourself existing without a body.

(2.2.3) The Cartesian Demon Example: Follow Descartes‘ sceptical procedure. Suppose that all your visual, auditory, olfactory and other sensory experiences are the product of a deception. By doing so, you’ll find that you can doubt the existence of the external world, including your own body, but that you cannot doubt your own existence. Thus, once again, you can conceive of your own existence in the absence of a body.

There are serious questions to be asked about these examples and whether they actually establish what they need to establish. We’ll leave those to one side for the time being and move on to consider the second argument in favour of premise (2).

The essential/accidental property distinction can be used as the basis of the following argument in favour of (2):


This argument owes its origins to the work of Descartes. The crucial premise here is (2.4). For it to be true, we need to have some reliable procedure for identifying what is an essential property and what is an accidental property; and we need that procedure to lead us to the claim stated in (2.4).

Jaworski points out two methods for identifying essential and accidental properties. One is the method proposed by empirical essentialists. They believe that the essential properties of an entity can only be identified after an exhaustive empirical study of that entity. The alternative method is that proposed by conceptual essentialists. They believe an a priori thought experiment can reveal what is essential and what is not.

Following the lead set by Descartes, the conceptual method is generally preferred by substance dualists. Jaworski describes the method as follows:

Following this method, we should find that having a body is a strictly accidental property of beings like us.

To be fair, Jaworski is aware of these points, as is clear when he discusses the criticisms of the argument. I’ll look at these next time round. For now, I simply present a complete map of the argument for substance dualism. As always, click on the image to see a larger version. 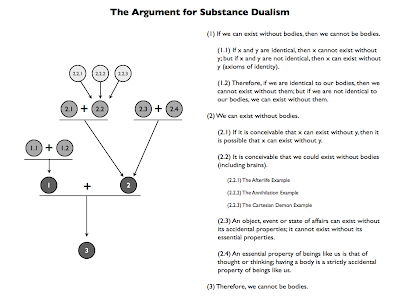