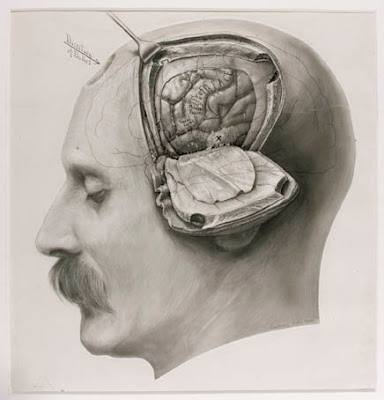 If you’ve any interest in the philosophy of mind, I highly recommend picking up a copy of William Jaworski’s recently-released Philosophy of Mind: a Comprehensive Introduction

. It does exactly what it says on the tin. It provides detailed, but not overwhelming, coverage of all the major theories and arguments in the field. I’d say it might be heavy going if you’re a complete newcomer to the topic, but if you’re familiar with it it’s definitely one way to seriously bump-up your knowledge.

One of the particularly nice things about the opening chapter of the book is Jaworski’s attempt to map the theoretical space within the philosophy of mind. In other words, his attempt to delineate and organise all the different theoretical positions on the nature of the mind. To give you a flavour of the book, I’m going to summarise this cartographic exercise.

At the most general level, theories about the nature of the mind can be separated into three categories: (i) monistic theories; (ii) dualistic theories and (iii) non-standard theories. Let’s look at each category in more detail.


1. Monistic Theories
The philosophy of mind is motivated primarily by the desire to resolve a number of mind-body problems. I’ll look at these in a future post. For now, all that needs to be known is that these problems generally concern the appropriate relation between our understanding of the physical world of scientific description and our understanding of the mental world of first-person description.

Monistic theories propose that the distinction between the physical and mental worlds is ultimately illusory: they are both, fundamentally, made up of the same kind of stuff. But what kind of stuff? There are three theories to contend with:

Idealism: This theory maintains that everything is ultimately mental. That our supposition of an external physical world is merely the result of an elaborate way of describing subjective mental experiences.

Neutral Monism: This theory maintains that everything is ultimately made up of a neutral substance that is neither physical nor mental. But this substance can be described in physical or mental terms.

Physicalism: This theory maintains that everything is ultimately physical. That our subjective mental experiences can ultimately be redescribed in physicalistic terms.

Of these three, it is physicalism that has been subjected to the most refinement in the past 50 years or so. Thus we are forced to further distinguish between a number of physicalist theories:

Eliminative Physicalism: This theory maintains that a complete physicalist theory of reality will ultimately eliminate the need to refer to the mental. Our mentalistic vocabulary is just a folk theory that needs to be replaced.

Reductive Physicalism: This theory maintains that mental facts are ultimately reducible to physical facts, but this does not mean all reference to the mental is somehow redundant or unimportant. There are two subdivisions within this theory (actually there are even more, but there’s no need to get too fine-grained when you’re starting out):

Non-reductive Physicalism: This theory maintains that although everything could ultimately be described by physics, the special sciences (psychology, sociology etc.) have descriptive and explanatory interests that cannot be fulfilled by physics. These interests are satisfied by the use of mentalistic descriptions. There are three sub-divisions within this category of physicalism: 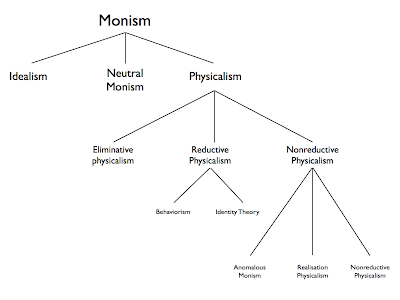 The descriptions of these different positions are exceptionally brief. As a result, it might be difficult to fully appreciate the distinctions between some of them.


2. Dualistic Theories
Dualistic theories adopt the same basic tagline: the distinction between the mental and the physical is real. Where they disagree is over the precise nature of that distinction:

Substance Dualism: This theory maintains that there are ultimately two kinds of stuff: mental stuff and physical stuff. Our minds, obviously, are made up of the former, not the latter.

Dual Attribute Theory: This theory maintains that there is ultimately only one kind of stuff but some of this stuff exemplifies irreducible mental properties that are not captured by physical explanations. This position is sometimes referred to as “property dualism” but Jaworski prefers the dual-attribute moniker for reasons presented in his chapter on this theory (mainly, because substance dualism is also committed to a kind of property dualism).

As was the case with physicalism, most of the philosophical action has been associated with one of these theories over the past 50 years or so. The theory in question is Dual Attributism, which can be broken down in the following manner:

Organismic DAT: This version of dual attributivism maintains that the kinds of entities displaying mental attributes are physical organisms. This theory can, in turn, be split in two:

Non-organismic DAT: This version of dual attributivism maintains that the kinds of entities displaying mental attributes might have some physical components, but are not organismic. This is a somewhat obscure position and is similar to substance dualism. 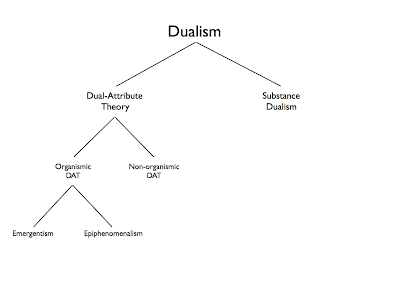 Instrumentalism: This theory rejects the realist assumption of the standard theories. According to this assumption the mental predicates we use are intended to pick out objects, events and states of affairs in the external world. Instrumentalism rejects this by maintaining that these predicates are merely tools used to predict human behaviour.

Hylomorphism: This theory rejects the mental-physical distinction-thesis that is assumed by the standard theory. According to this thesis, there really are two vocabularies used to describe and explain human behaviour. Monistic theories may think the two can be reduced to one, and dualist theories may think they cannot, but they both agree that the vocabularies exist. Hylomorphism does not. It maintains that their is a unique vocabulary for describing and explaining human behaviour. One interesting feature of Jaworski’s book is his defence of the claim that hylomorphism is a distinct theory. 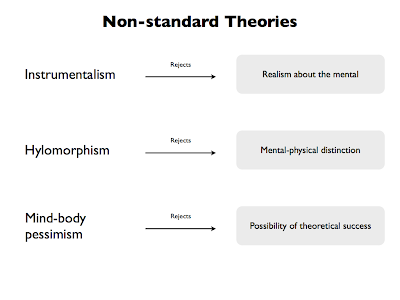 Email ThisBlogThis!Share to TwitterShare to FacebookShare to Pinterest
Labels: Philosophy of Mind