Harman on Benatar's Better Never to Have Been (Part Two)

This post is the second part of a brief series looking at David Benatar's anti-natalist arguments. It does so through the lens provided in this article by Elizabeth Harman. Anti-natalism (at least as defended by Benatar) is the view that it is always morally wrong to bring a sentient being into existence.

The first part introduced us to Benatar's two arguments for anti-natalism. As noted there, the arguments are supposed to be independent of each other. This first one is an "in principle"-argument and the second one is an "in fact" argument. In this entry, we'll look at Benatar's defence of the "in principle"-argument as well as Harman's criticisms of it.


1. The Asymmetry Thesis
Benatar's first argument depends on a key premise (in case you're wondering the numbering follows from the previous entry):


This is very strange. It is stating that if you bring another sentient being into existence you are, morally speaking, on the hook for all the bad aspects of their life, but not all the good aspects. What reason might there be for endorsing this premise?

This asymmetry thesis seems, on the face of it, intuitively plausible. However, it does rely on certain ambiguities that will be challenged later on. For the time being, we can take it as is and follow Benatar in using it to identify four morally relevant facts about existence and non-existence.

(a) If we procreate and bring a being into existence there are two relevant facts:

(b) If we do not procreate and thereby fail to bring a being into existence there are two relevant facts:

We can arrange all of this information into the following table. 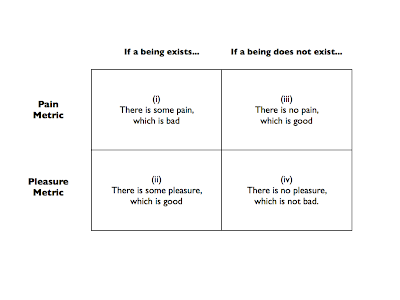 2. The Comparison Principle
Now that we have all the relevant facts with respect existence and non-existence in place, what do we do next? Answer: we perform some sort of comparison of the available options.

Like I said, that seems like the natural way to perform the required comparison. This is not the method that Benatar uses. And it’s easy to see why not: if he did use this method, his first argument would simply reduce to his second and so would fail to provide independent support for his overall conclusion.

On the face of it, this comparison principle is outright bizarre. And it’s not clear from Harman’s review whether Benatar offers any sort of defence of it. But I’ll leave it to one side for now because there is a deeper question to be asked.


3. The Argument for Premise 2
The deeper question is: assuming Benatar’s comparison principle is legitimate, what sort of conclusions can be drawn from it? Remember, the goal here is to offer some sort of support for premise (2).

Harman offers one potential route that Benatar can take from the comparison principle to (2). I’ll sketch this out here. It begins with the following principle (again numbering continues from part one):

Although I agree with Harman that this makes sense of Benatar’s comparison principle, it does so at quite a cost. I, for one, certainly don’t think harm and benefit can only be understood in contrastive terms. Anyway, nevermind. Let’s continue.

If we combine (8), with the results of Benatar’s comparison exercise:


We can draw the following conclusion:


Which is pretty much the equivalent of (2). So we’ve done it, we’ve moved from the asymmetry thesis to the desired conclusion. Or have we? 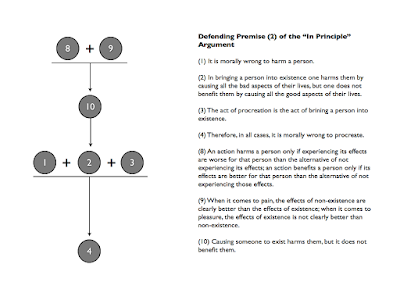 4. Some Criticisms
I think there are lots of problems with this argument. As noted above, I can’t see the justification for the comparison principle. What’s more, I’m not convinced that (9) is true. Even if non-existence is not bad, it doesn’t follow that existence is not better. At least, I can’t see how it follows. Surely the pleasure derived from existence could make it better than the alternative of not existing?

There are other problems as well. Harman mentions three, which I’ll summarise here.

This creates a problem for Benatar because if the absence of pain is only impersonally bad, then it does not follow that we harm a person by bringing them into existence to experience pain. That would only follow if the absence of pain were good for that particular person. But this can’t be the case here, because Benatar’s counterfactual involves a scenario in which the person does not exist.

That’s quite a mouthful, but I think it makes sense. It can also work the other way round. If it’s impersonal goods that matter, then why would it not be true that the absence of pleasure in the world is impersonally bad?

To put it more generally, it seems like whatever can be said in favour of the first part of the asymmetry thesis can also be used to deny the second part.

The third problem with Benatar’s argument is that the intuitions motivating our initial acceptance of the asymmetry thesis can be best explained using concepts other than goodness or badness. To be precise, it seems like Benatar is mixing up theories of good with theories of right action.

I suspect most people would agree that we have strong prima facie reasons to avoid inflicting pain on other human beings, but that we have only weak reasons to make people’s lives more pleasurable. To put it in the usual philosophical language, avoiding harm seems to be obligatory whereas bringing about pleasure is supererogatory. This effectively accounts for the asymmetry thesis but does so in the language of right actions.

The problem for Benatar is that it does not follow from this version of asymmetry that the absence of pleasure is neither bad nor good (as he seems to claim) or that we breach any moral obligation in trying to bring it about. The existence of pleasure might be a very good thing indeed, and we would be well within our moral rights to bring it into existence. This runs contrary to Benatar's main conclusion.

Okay, that’s it for now. In the final part, we’ll briefly consider Benatar’s second argument and then address the implications of his argument.
Posted by John Danaher at 11:48 PM