Tweet
I finally have a window open for a blog post or two. Something short and sweet. 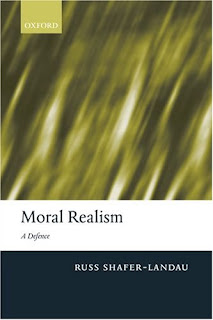 Some background first. I have recently been reading Russ Shafer Landau's book Moral Realism: A Defence. I must say, even if you don't like the idea of non-naturalistic moral realism, you have to admire RSL's ability to communicate complex ideas in a fluid, almost lyrical style. It's certainly one of the most readable and serious works of philosophy I have come across.

As someone who does not have a grounding in metaethics (I have plenty of familiarity with normative and applied ethics however), I particularly liked his nihilist/constructivist/realist breakdown of theories in Chapter 1. It helped me clarify some of my own thinking on the matter. And so I want to share that breakdown in this post.

This will set things up nicely for a series on Erik Wielenberg's non-theistic non-natural realism that I am planning for next week.

Those who are familiar with metaethics will probably be aware of the standard cognitivist/non-cognitivist breakdown. Everything said here is consistent with that approach.


1. Sense and Reference
We must begin with some comments about the sense and reference of propositions. We have a fondness for uttering propositions, things like "There is a tree outside my window", "Darth Vader is Luke Skywalker's father", "Murder is bad" and so on.

All of these propositions have a sense or meaning or connotation. I don't suppose anybody was discombobulated when they read them, as they might have been if I had said something like "Gargle shrumps in the slingerwood".

But do these propositions refer to anything deeper? Are they capable of being true or false? This is the question at the heart of metaethics and it is a question to which Shafer-Landau thinks there are three possible replies.


2. Nihilism
The first reply denies that the propositions are capable of being true or false. We can imagine Star Wars fans thrashing out the minutiae of the Skywalker family's internal problems, but at the end of the day, that entire discussion is incapable of referring to anything real.

Moral nihilists think that the conversations between moralists are a lot like those between Star Wars fans: erudite, passionate, littered with jargon, occasionally witty, but ultimately signifying nothing.


3. Constructivism
The constructivists think there is genuine truth and falsehood but it is of an interesting kind. Imagine you have bought a plot of land and bring me out to take a look at it. As we stand gazing at an empty field, you proclaim "There is a house over there". I am somewhat agog. You must have lost your mind.

But suppose I return a few months later. In the interim you have hired a contractor and he has built you a house. Now, when you proclaim "there is a house over there" I think nothing of it. You statement obviously has truth-value.

Well perhaps morality is a little like that. It is something that we construct through social convention or agreement. But once it has been constructed, it becomes perfectly acceptable to speak about people being morally right and wrong.

Various candidates for this morality constructing process have been identified. There is, for instance, the classic social contract for mutual self-interest from Thomas Hobbes; the egalitarian contract negotiated behind a veil of ignorance from John Rawls; and the ideal rational observer from Roderick Firth.

Whether any of these can be used to build a secure morality is another question.


4. Realism
Finally, there is the realist position. Most of us are default realists when it comes to scientific and perceptual propositions. For example, when I say that the table is made of atoms or that there is a tree outside my window, it is assumed that I am referring to an independent realm of facts. One that does not rely on me for its existence.

Moral realists, unsurprisingly, think there is a mind-independent realm of moral facts. So that when we say "murder is wrong" and "charity is good" we are not simply mouthing absurdities or talking about cultural conventions, we are talking about a set of facts that are deeply woven into the ontological fabric of reality.

Non-naturalistic realism is metaphysically disturbing to some, so its defenders often build analogies with other non-natural facts that seem less disturbing. A classic example would be mathematical and logical facts such as "1+1=2" or "A is A". Neither of these seem to be natural and yet they are widely embraced. Indeed, they even seem to have some normative force.


So there you have it: three potential approaches to moral truth.
Posted by John Danaher at 11:36 PM