Tweet
This post is part of my series on Erik Wielenberg's article "In Defence of Non-Natural Non-Theistic Moral Realism" (or NNMR for short). Parts one and two are available here and here.


In this article, Wielenberg contends that moral facts exist; that they supervene on natural facts but are not reducible to natural facts; and that at least some of them are brute, which means that they do not require any explanation or ontological grounding. He then defends these contentions from theistic criticisms.
In this post I cover Wielenberg's responses to the criticisms of J.P. Moreland and William Lane Craig. 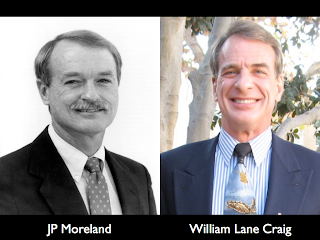 1. Mysterious Floating Values
Craig and Moreland's tactic is to find novel ways of describing the jaw-dropping incredulity they experience when they think about Wielenberg's NNMR. Here is a representative example:

What does it mean to say, for example, that the moral value justice just exists?...It is clear what is meant when it is said that a person is just; but it is bewildering when it is said that in the absence of any people, justice itself exists...Atheistic moral realists seem to lack any adequate foundation in reality for moral values but just leave them floating in an unintelligible way. (From Philosophical Foundations for a Christian Worldview, p. 492)

We can distill two objections from this passage. First, there is the idea that values only make sense if they are the properties of a person. Second, there is the idea that it makes no sense to have free-floating, ontologically untethered moral values.
Is there any force to these objections? Wielenberg's answer, unsurprisingly, is "no". In elaborating on this answer he follows his, by now familiar, tactic of showing how the theist ultimately shoots themselves in the foot: they try to deny the existence of brute ethical facts but actually need them to sustain their own moral theories.
Wielenberg makes this point by paying particularly close attention to the variety of moral realism embraced by William Lane Craig (sorry JP!).
2. Rights and Duties in Craig's World
Anyone who has listened to Craig's public debates will be familiar with his "just animals" line. He maintains that without God, humans are just accidental byproducts of evolution, just receptacles for improper animalistic instincts. And as such cannot be the bearers of moral rights and duties.

For example, he frequently claims that rape cannot be really wrong on the atheistic worldview. The best that can be said is that it is socially disadvantageous.

The standard atheistic response to this is that humans have certain capacities (e.g. to feel pain, and to reason about the world and their place within it) that are morally relevant. So rape is morally wrong because it causes harm, compromises autonomy, makes the victim feel subordinated and so on.

Craig has a well-rehearsed response to this as well. He argues that the atheist has no right to think that harm is morally wrong. The atheist is simply presupposing a morality and using this to reach desired conclusions. The presupposed morality does not rest on anything.

The theist, according to Craig, is on much firmer footing because his/her morality is grounded in the commands of a good God.


3. Craig's Moral Shopping List
In all of this, Craig is simply assuming what he needs to prove: that morality needs a foundation external to itself. Indeed, he makes this point explicitly in a passage responding to some of his critics. This passage is worth quoting in full:


My experience with [non-theistic moral] theories is that they inevitably just assume gratuitously that on a naturalistic view of man, some feature of human existence, say, pleasure, is an intrinsic good, and then proceed from there. But the advocates of such theories are typically at a loss to justify their starting point. If their approach to meta-ethical theory is to be..."serious metaphysics" rather than just "a shopping list" approach, whereby one simply helps oneself to the supervenient moral properties needed to do the job, then some sort of explanation is required for why moral properties supervene on certain natural states. (From The Craig-Flew Debate, p. 171)

Craig's penchant for pugnacious rhetoric is on full display here. But the irony is twofold. First, he himself appeals to Robert M. Adams's moral theory, which as we saw presumes the existence of brute ethical facts. Second, he acknowledges the need for somewhat arbitrary moral starting points, he just thinks God is a less arbitrary starting point.

Interestingly, one of his justifications for this latter point is that God is, by definition, a being worthy of worship. But as Wielenberg points out, such a justification can only work on the presumption that "worthiness of worship" is a brute ethical fact. Something that is not grounded in God's will.


4. Conclusion
This brings us to Wielenberg's final point. Which is that both theistic and non-theistic moral realists begin with, to co-opt Craig's phrase, inexplicable ethical shopping lists. The theistic shopping list consists of things like:

The non-theistic list consists of things like:
Neither party can provide any deeper explanation or ontological grounding for all the items contained on these shopping lists.
And this is the whole point of Wielenberg's article: the idea of brute ethical facts is not problematic for the atheist, unless it is also problematic for the theist.
Posted by John Danaher at 9:21 PM