Tweet
This post is part of my series on Chapter 7 of Gregory Dawes's book Theism and Explanation. In this chapter, Dawes considers the merits of theistic explanations in light of six explanatory virtues.

In this final entry in the series, we will consider theism in light of the virtue of informativeness, and we will also summarise the conclusions reached in this chapter. 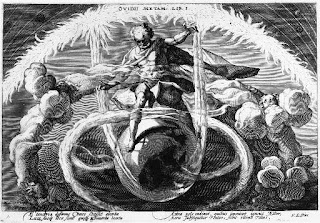 1. What is Informativeness?
In defining informativeness, Dawes relies on Peter Lipton's definition of a "lovely" explanation. This definition has two aspects to it. First, the explanation must specify some causal mechanism. Second, it must allow us to deduce precise effects that would arise from this mechanism.

Earlier in the book, Dawes argued that theistic explanations are unlikely to be able to specify a causal mechanism, but that this is not necessarily a fatal objection to them. Still, it is worth seeing how well theism does in terms of the second aspect of informativeness, i.e. our ability to deduce precise effects from it.

It will no doubt shock you to learn that theism is not very informative in this regard. Let's see why that is.


2. Quantifiable Predictions and Intentional Explanations
The first, somewhat spurious, objection to theism is that we cannot deduce precise quantifiable predictions from it. This is something that we can do in the case of the most successful scientific explanation: we can specify a causal mechanism and specify what the measurable effects of this mechanism would be (see my posts on neuroscientific explanations for more).

But the fact that theism fails in this regard is not a serious charge. Theistic explanations are a species of intentional explanation. As such they explain events and states of affairs in terms of the goals and intentions of an agent. We employ such explanations all the time, e.g. when trying to make sense of the behaviour of our family and friends.

None of these everyday intentional explanations yield precise quantifiable predictions, so we shouldn't expect theism to do so either.


3. The Problem of Mysteriousness
There is, however, a problem with theistic explanations that is not shared by typical intentional explanations. In dealing with human behaviour and social interaction, we know what to expect.

For instance, we know the type of conduct to expect from someone if they are feeling hungry, or if they have just learned that their husband/wife are cheating on them, or if they have a desire to become a doctor and so on. In this sense, everyday intentional explanations are informative.

Theistic explanations are not. We are not able to generate similar expectations when applying mental or action predicates to God because the nature of his agency is "wholly other". The mental and actions predicates that are applied to human beings are tailored to their finite, temporal and physical properties. What would it mean to apply the same predicates to an infinite, eternal and non-physical being.

This may be true. But in extracting the core meaning, we take away all the things that make these predicates informative (in the sense defined above). We do not really know what to expect from a creation that emanates from an infinite, eternal and non-physical being.

The example that Dawes uses to illustrate this point is quite interesting. He imagines a believer who has a powerful experience of confidence and joy when reading passages of scripture. The believer is told that he has experienced what is known as the "internal testimony of the Holy Spirit".

This explains his experience and also serves to corroborate religious claims concerning the authority of the scripture.

Dawes concludes by noting that uninformativeness is a serious problem for theists. Indeed, it is so serious that it means non-theistic, natural explanations that yield precise predictions will almost always be preferable.


5. Summary
In this series we have investigated the explanatory merits of theism in light of six explanatory virtues. The results of this investigation are summarised in the image below (click to embiggen). 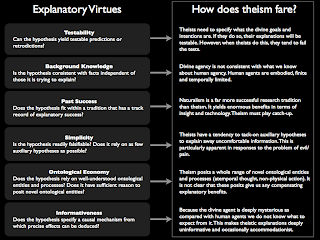