What is Contructivism in Metaethics? (Part 1)

In a previous post, I sketched three different metaethical strategies: nihilism, constructivism and realism. The nihilist thinks there is no moral truth; the realist thinks moral truths a like scientific, mathematical or logical truths; and the constructivist thinks we make our own moral truth.

I have made gestures towards non-naturalistic realism in my posts on Wielenberg and Morriston. I now take up the constructivist baton. In doing so, I will rely on the writings of Sharon Street. As far as I can tell, she seems to have the most highly-developed arguments on the metaethical pretensions of constructivism. I will use the following article as my guide:


"What is Constructivism in Ethics and Metaethics?" (2009) Vol. 4 Philosophy Compass

Although I am beginning to appreciate the realist position, I still find constructivism to be the more plausible position (at least from a practical, everyday point of view) and Street does a good job explaining it.


1. The Proceduralist Characterisation
The mistaken, but influential, characterisation of constructivism comes from a famous article by Darwall, Gibbard and Railton reviewing 20th century metaethics. They suggested that constructivism was all about defining a procedure for creating moral truths.

The most famous account of this procedure comes from John Rawls's Theory of Justice. Rawls argued that if you take a set of inputs -- namely, the attitudes and preferences of rational actors -- and processed them in the appropriate way -- i.e. get the actors to bargain with each other from behind a veil of ignorance -- you would get a set of moral outputs -- in this case, principles of justice.

This is illustrated schematically below. 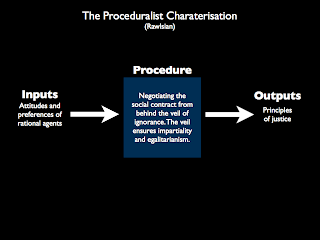 There are problems with this characterisation. First, there are competing accounts of the correct constructivist procedure. The fact that such a dispute arises, suggests that there are further metaethical questions to be asked.

Second, the proceduralist characterisation seems to equate constructivist with another metaethical position: ideal observer theory. Indeed, some think they are in fact the same thing. Street disagrees, and later in the article she explains why.


2. The Practical Standpoint Characterisation
Street favours an alternative characterisation of contructivism. She calls this the "practical standpoint"-chacterisation. The following is a quick sketch.


We begin in a pre-philosophical state, somewhat puzzled by the concept of value. In this state we don't know what it could mean for something to be morally valuable, but we do know what it means to value something. In other words, we know what it is to value food, security, friendship, education, sex and so on. But we are not sure whether it's worth it.

The ability to value certain things is the distinctive feature of the practical standpoint.

We also know what it is for some actions to be entailed by certain values. For instance, Ann may value the counting of blades of grass. We may think this an appalling waste of her talents but, granting her her idiosyncrasy, we can say that the purchase of a calculator would be a "good" thing.

This sense of entailment is, according to Street, non-normative in the sense that it says nothing about what we should or ought to believe (Steve Maitzen -- if he still reads this blog -- may raise an eyebrow or two at that claim).

In any event, the key constructivist claim is the following: normative truth consists in what is entailed from the practical standpoint.

Rawls, as mentioned, presupposes the moral virtue of impartiality; Scanlon presupposes the virtue of living with others on terms acceptable to all. Where these presuppositions come from, or what metaethical theory they rely on, is anyone's guess. That is to say: restricted constructivism is consistent with moral realism.

Metaethical constructivism tries to articulate a more complete moral theory. It does so by trying to offer a formal account of what it means to take the practical point of view. There are two classic versions of this.

According to Kantian constructivism, the endorsement of what we normally call "moral" precepts, is part and parcel of being a rational agent. So, a rational agent will always have reason to respect the dignity of others; to refrain from lying, cheating, stealing, killing; and so on.

According to Humean constructivism, we are endowed (by culture or evolution) with a set of natural and artificial evaluative attitudes. Morality is built (constructed) from these attitudes. If they had been different, morality would be different.

Note: Street uses the term "evaluative attitudes" and not "desires". She claims that there is an important distinction but does not say what this is. Instead, she points us to another article where she makes this distinction. I hope to cover that article eventually. For now, I'll accept it.

The taxonomy of constructivist positions is illustrated below. 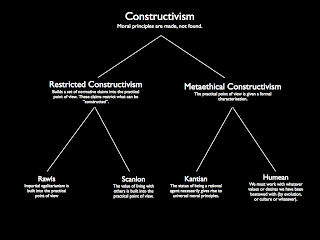 That's it for this post. In the next part we will follow Street as she distinguishes metaethical constructivism from other metaethical positions.
Posted by John Danaher at 11:11 PM