What Good is an Explanation? (Part 1) 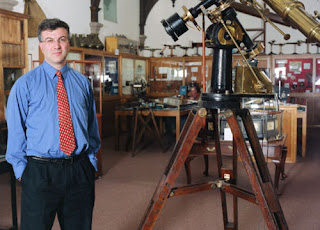 Peter Lipton's death in 2007 was a great loss to the philosophy of science. He was probably the foremost explicator and defender of the explanatory method which I find most congenial: inference to best explanation.

In this brief series, I am going to take a look at one of his articles. The following one to be precise:

It will no doubt come as a shock to learn that in this article Lipton attempts to answer a meta-question about the good of explanations. In other words, instead of asking "what makes for a good explanation?" he asks "why should we even bother explaining something?".

The answer to this meta-question is hardly earth-shattering. We explain things for instrumental reasons, i.e. to help us achieve some other goal, and also to achieve the intrinsic good of "understanding".

The majority of the article is taken up with trying to determine what this intrinsic good of understanding really consists in. Only at the end does Lipton return to the instrumental good of explanation.

In this post we will do two things. First, we will identify three key features of an explanation, features that must be accounted for in any formal definition of "understanding". Second, we will consider five possible definitions of understanding.


1. Three Key Features of an Explanation
Lipton begins his article by highlighting three uncontroversial and yet key features that are shared by most explanations. These features serve as diagnostic tests for any sound conception of understanding.

The first of these features is the distinction between knowing that something is true and understanding why it is true. Suppose you and I have just received our exam results. We both did badly. Staring askance at our grades, we are both inclined to ask the "why" question: why did I do so badly? In this scenario, we both already know that we did badly. We now want something more: we want to understand.

The second of these features is the benign nature of the why-regress. We all know the irritating manner in which every possible answer to a why-question can be followed up by another why question. As follows:

The important point here is that explanations are not worthless just because there is a potentially infinite regress of why-questions. Genuine understanding can be gained at each link in the question-and-answer chain.

The third feature of explanations is that they are sometimes self-evidencing. What this means is that the data they are intended to explain can, at least partially, justify us in accepting them. So for example, my lack of study can explain why I failed the exam; and my failing the exam can provide evidence for my lack of study. There is a kind of circularity here (H explains E; E justifies H), but it is not vicious.

The first two of these make understanding an epistemic matter; the last two make it an ontological matter; the middle one can go either way. This will make more sense once we have gone through them, which is what we are now going to do. 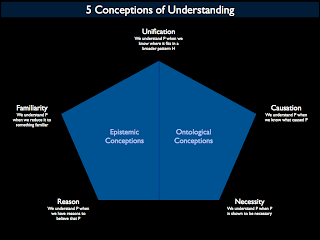 2. The Reason-Conception of Understanding
According to this conception, what we really want from an explanation of a particular fact is a reason to believe in that fact. So questions of the form "why P?" need to be restated in the form "why should we believe that P?". Bayesian evidentialists are fond of this idea.

There are two main attractions to this conception. First, it doesn't distinguish between reason-seeking why-questions and explanation-seeking why-questions. So it reduces the size of the set of epistemological questions we need to ask. Second, it does not rely on somewhat dubious metaphysical concepts, such as causation and necessity.

There is, however, one significant problem with it: it fails to account for any of the three features of explanation outlined above.

3. The Familiarity-Conception of Understanding
According to this conception, an explanation works when it reduces the unfamiliar to the familiar. So the goal of all explanations should be to build analogies (or other logical bridges) between the known and the unknown. For example, Charles Darwin explained the "design" exhibited in the natural world by building an analogy between the processes of artificial and natural selection.
This conception fits well with the typical context in which explanations are sought, namely: the context of epistemic surprise. In other words, we tend to seek explanations when something seems unfamiliar or surprising and this tendency is captured by this conception. Also, this conception does account for the gap between knowing and understanding: something is understood when it is rendered familiar; something is known when we have reasons to believe in it.
Despite these good points, the familiarity-conception does poorly when dealing with the other two features of explanations.
4. The Unification-Conception of Understanding
According to this conception, something is understood once we can see its place within a broader, more unified, conception of reality.
This unification-conception accounts for two of the key features of explanation outlined above. First, it accounts for the gap between knowledge and understanding: we can know that a fact is true without necessarily knowing where it fits in the broader conception of reality.
Second, it accounts for the self-evidencing nature of explanation. Lipton uses an analogy to make this point: a single piece of a broader pattern can provide evidence for that broader pattern, while at the same time the broader pattern can help us to understand the role of function of the single piece.
It may also account for the why-regress, although Lipton thinks this is less clear. It would do so by showing how E is explained by the wider pattern of H, while leaving the place of H within a still wider pattern unclear.
5. The Necessity-Conception of Understanding
According to this conception, something is understood once it has been shown that it had to occur; that there was no other way things could have turned out. This brings us face-to-face with the principle of sufficient reason, a metaphysical concept beloved by theists and atheists, which is used to argue for the existence of a necessary being.
This necessity-conception can account for the gap between knowledge and understanding. After all, something can be known to be true without being known to be necessarily true. There would also appear to be no problem with self-evidencing necessary explanations.
Where the conception appears to fall down is with the why-regress. It would seem that in order for an explanation (H) to confer necessity on a set of facts (E), the explanation would itself need to be shown to be necessary. This would rule out the possibility of being satisfied with an explanation that was not itself shown to be necessary.
6. The Causal-Conception of Understanding
According to this conception, something is understood once we have information concerning its causes. This is the conception of understanding that Lipton himself prefers.
The causal-conception can easily account for the three key features of explanation that we have been discussing:
Despite these powerful attractions, there are, of course, challenges facing the causal conception. Lipton identifies three important ones.
Acknowledging these challenges, Lipton's goal for the remainder the article is to offer a more detailed defence of the causal conception of understanding. I will outline that defence in part two.
Posted by John Danaher at 4:35 PM