Tweet
This post is part of my series on Hume's moral philosophy. The series works from the article "The Foundations of Morality in Hume's Treatise" by David Fate Norton in the Cambridge Companion to Hume. For an index, see here.

In part 1, we took a quick look at some of the contemporary views on moral philosophy that would have influenced Hume. We concluded by looking at the views of Francis Hutcheson. Hutcheson claimed that all humans have an innate moral sense that allows them to identify and distinguish between virtue and vice. He clarified this by saying that the properties of virtue and vice were not produced by the moral sense; rather, they were real observer-independent properties.

Hume diverges from Hutcheson on this point. He argues that moral properties are entirely the creation of the moral sense. The remainder of this series will explore how Hume reaches this conclusion and what this entails.

In this part we will follow Hume as he takes the first steps towards his completed moral theory. These first steps signal Hume's break with the tradition that preceded him.


1. The Cartography of the Mind
Like all things Humean, we must begin with a excessively brief summary of Hume's psychological theory. Although Hume was an empiricist, and so thought that knowledge came from experience, his empiricism was undergirded with a theory describing the mechanics of thought.

Very roughly, Hume felt that all mental events could ultimately be made to fit into two categories: ideas and impressions. The impressions are the immediate and vivid products of sensory experience (although they can also arise spontaneously through reflection), they include the passions and the emotions.

The ideas are the feeble copies of these original impressions. They encompass the abstract, theoretical and conceptual categories that haunt the annals of philosophy. They were the playthings of the rationalist philosophers that Hume abjured.

This mental cartography forms the bedrock of Hume's philosophical programme. 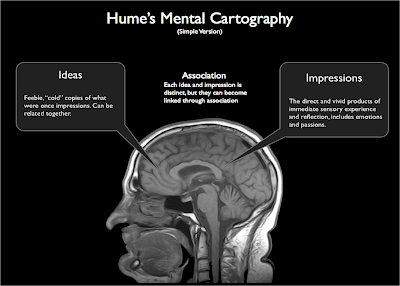 2. Contra Rationalism
For the rationalists, moral distinctions came from the relations of ideas (Reason). For example, Clarke and Shaftesbury (whose views were covered in part 1) constructed elaborate theoretical frameworks for understanding the natural world. According to such theories, each organism had a natural place in the world, and it was from these natural places that they derived their moral worth.

3. Moral Sentiments
Implicit in Hume's rejection of rationalism is his endorsement of the idea that moral judgment is a product of the sentiments. In making this endorsement, Hume introduces considerable nuance into our account of the moral sentiments.

Hume is quick to point out that not all pleasures and pains are morally relevant, only a unique subset form the basis of our moral judgments. This unique subset consists of approbation and disapprobation, and they are only provoked when we consider the actions of human agents.

More interestingly, Hume argues that the moral sentiments are only felt when we abstract away from our personal circumstances and take a disinterested perspective on human action. For example, the valor and courage of our enemies may cause us pain, but those qualities can still be thought morally virtuous.

Okay, that's it for now. In the next part we will take a more detailed look at Hume's taxonomy of the virtues.
Posted by John Danaher at 6:47 PM

Email ThisBlogThis!Share to TwitterShare to FacebookShare to Pinterest
Labels: Hume on Morality