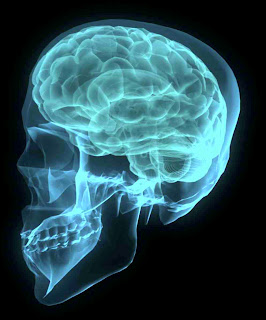 I am currently working my way through an article by Sripada and Stich entitled "A Framework for the Psychology of Norms". The goal of the paper is to provide a framework for research into the cognitive underpinnings of normative behaviour.

The model presented here is described by the authors as a "first pass". They add elements to it later in the article as they consider some open questions for future research. I'll introduce some of those questions at the end of this post.

The norm-acquisition mechanism helps us to pick up on external behavioural cues in our cultural environment. From these cues it infers that a particular set of norms are in existence. The acquisition-mechanism starts to work at an early age and is involuntary in nature.

The implementation-mechanism maintains a database of norms and generates a set of intrinsic motivations to comply with those norms. It may also play a role in detecting norm-violation. More on this later.

The basic model is illustrated in box-and-arrow fashion below. 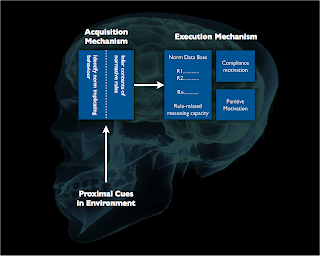 The authors argue that this model helps to explain the data reviewed earlier in the article, makes substantive claims about innateness, and provides a framework within which future research questions can be pursued.

2. Some Open Questions
In the remainder of the article, Sripada and Stich review some of these questions. I will look at the first three sets of questions here, leaving the remainder for Part 4 of this series.

a. Morality and Normative Psychology
One big set of questions relate to how moral norms are differentiated, if at all, from other norms. There is some evidence suggesting that people process and interpret moral norms in a distinctive way. This suggests that moral norms might constitute a distinct subset within the norm-database or even have their own unique, uncontaminated psychological system.

The authors speculate that since this question overlaps with metaphysics and semantics (metaethics) it is unlikely to be resolved any time soon.

b. Proximal Cues
The next set of questions relates to the proximal cues that bring about norms acquisition. It could be that they are acquired in response to displays of punishment, but that seems unlikely given that children seem to acquire norms without exposure to such displays.

The psychologist James Blair suggested that norms are acquired when a parent's "sad faces" are paired with specific actions by a child. This was well-criticised by the philosopher Shaun Nichols.

It could also be that norms are at least partially acquired in response to verbal instructions.

c. Norm-Storage
The third set of questions relates to the storage of norms in the database. This touches on some long-standing debates in the philosophy of mind.

The classic position, associated with the work of Jerry Fodor, is that norms (like other mental concepts) are stored in sentence-like structures in the brain.

There are, however, a number of alternatives to this. According to exemplar theory, a cluster of cases that exemplify a norm are stored. When confronted with a normative decision, a person will search their database of exemplars and use similarity judgements to figure out what to do in the present context.

A question arises as to whether or not the entire database of norms is searched whenever a decision is made. This is unlikely. Recent cognitive and emotional history is apt to make certain exemplars more readily available to decision-making. Stich is himself a fan of this account.

Okay, that's it for Part 3. In Part 4 we will look at some additional research questions on the role of the emotions, explicit reasoning and cognitive biases in normative behaviour.
Posted by John Danaher at 12:44 PM