What is a Cause? (Part 2) Crossing the Desert 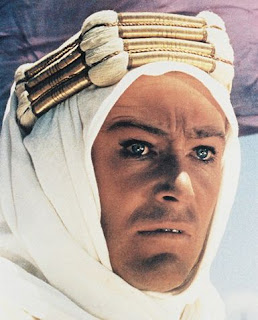 This post is part of my series on Steve Sloman's book Causal Models. For an index, see here.

I am currently working my way through Chapter 3 of Sloman's book which offers a basic introduction to the concept of causation. At the close of Part 1, causation was defined in terms of counterfactual dependence. In this part we will cover some of the problems with this definition.


1. Crossing the Desert
The problems facing the counterfactual definition are well illustrated by a famous thought experiment. I have encountered many versions of this but here I will stick with Sloman's version.

A Sheik, with a well-stocked harem, is setting out on a journey across the desert. Obviously, deserts are not always the most congenial of environments, so he needs to take some precautions. In particular, he needs to ensure he has plenty of fresh water in his water canteen.

Unbeknownst to him, all is not well in the harem. His wife and one of his mistresses are independently plotting his demise. The wife poisons the water in his canteen, while the mistress punctures the canteen so that the water slowly leaks out.

The Sheik sets out on the journey. After a few miles he feels parched. He unscrews the cap on his canteen and finds, much to his displeasure, that it is empty. He soon dies of dehydration.

Question: who caused the Sheik's death, the wife or the mistress?


2. The Mistress...Duh
The answer seems obvious to most: the mistress clearly caused the death of the Sheik. After all, he dies from dehydration not poisoning.

This statement is clearly untrue when applied to the scenario above. If the mistress had not punctured the canteen, the Sheik would still have died.

Our definition must be expanded to cover scenarios of this sort. The expansion must allow our definition to be sensitive to what actually happens while at the same time retaining the "possible worlds" aspect of causation.

This is a difficult task. Are there any solutions?


3. Mackie and the INUS
As a matter of fact there are. Perhaps the most famous attempt to deal with problem cases of this sort is that of JL Mackie. Sloman gives a quick summary of Mackie's definition, although he recommends reading the original.

It should also be noted that Sloman's book is not really about these philosophical puzzles so his discussion of Mackie is an aside.

Mackie argued that a "cause" is really only one element in a larger entity, namely a "sufficient set". The sufficient set consists of all the conditions that led to an effect. In the case of the Sheik's dehydration, the sufficient set would include: the biological needs of the human body; the physical environment of the desert; the Sheik's intention to cross the desert and the mistress's actions.

Mackie argued that a "cause" is actually an INUS, which is "An Insufficient but Necessary element of an Unnecessary but Sufficient set". Quite a tongue-twister, I'm sure you'll agree.

What singles out the mistress's actions as the true cause of the Sheik's death is that they are an INUS: the puncturing of the canteen is one (I) of the critical elements (N) in one (U) of the large set of conditions that led to the Sheik's death (S).

The poisoned water was not an INUS because the sufficient set that would have involved the Sheik drinking the water did not obtain.


4. Causal Graphs
Sloman's approach to causation involves the use of causal graphs. These are simple "box-and-arrow" diagrams where the boxes represent events and the arrows represent causal relations. He defines a cause as anything that can be represented as an arrow in a causal graph.

If that sounds philosophically suspicious (defining cause in terms of causal arrows?) that's because it is. Sloman acknowledges this but argues it is okay because the framework can explain how human beings use causal knowledge. 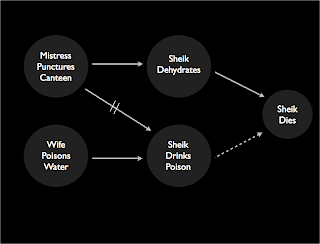 This approach to causation is developed to a much higher degree of sophistication in Chapter 4 of Sloman's book. We will be looking at that in due course.


5. Other Types of Invariant
Sloman closes chapter 3 by looking at how broad our theory of causation should be. He notes that a theory that explains everything explains nothing. There is then a fear that the theory of causal modeling outlined in his book could be explanatorily empty.

Likewise, probability theory covers other types of invariance (frequencies etc.) and overlaps considerably with causation theory. However, they are not equivalent. This is because probabilities can be applied to correlations and, as we saw in Part 1, correlation is not causation.

In the next entry in this series I will look at Chapter 4 of Sloman's book.
Posted by John Danaher at 3:13 PM