This post continues the discussion of Chapter 5 of Gregory Dawes's book Theism and Explanation that began here.

As noted last time, Dawes is trying to argue that theistic explanations cannot be a priori wiped from the explanatory menu. They can be genuine intentional explanations: they can explain events and states of affairs by relating them to a set of beliefs, desires and intentions.

It may turn out that these intentional explanations aren't any good in practice (Dawes makes this case), but they are, nonetheless, worthy of consideration.

In this entry, we will take a look at one variety of theological scepticism that is attributable to philosopher of science Elliot Sober. We will also look at Dawes's response to Sober's scepticism. 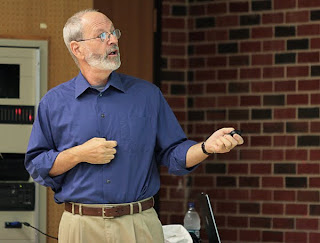 1. Sober Scepticism Described
Sober's theological scepticism begins with his consideration of the design argument. Sober analyses this argument in accordance with what he calls the "likelihood principle". This uses concepts from confirmation theory.

The likelihood principle is a way of testing the strength of a potential explanation by comparing its probability with the probability of an alternative explanation. As follows:

Looking at the arguments of intelligent design theorists,* Sober points out that they try to compare the likelihood of two hypotheses, design (D) and chance (C), given certain observed features of the natural world (O).

They are aware of Darwinian explanations but think these are insufficient. So the contest is between chance and design. And, of course, they think this is no contest at all: design wins hands down. In other words:
Sober thinks they are wrong to jump to this conclusion, not because chance is a good explanation, but because the design hypothesis is incapable of yielding any probability judgements whatsoever.

His reasoning is as follows. He concedes that we often do make inferences to design (or, more appropriately, intention) in the sciences. For example, archaeologists do it when they discover artifacts. But the reason they can do this is that they already know something about the beliefs, desires and intentions of human beings. Using this background knowledge, they can specify how human beings might be expected to act and makes guesses about the artifacts they might be inclined to create.

There is no analogous background knowledge when it comes to God. The theist can of course look at structure of the vertebrate eye and exclaim "how clever of God to include a blindspot! A permanent reminder of our limitations and his transcendence." But to do so merely begs the question: is the vertebrate eye actually attributable to a divine intention?

We can postulate divine goal-ability pairs til the cows come home, but this is ad-hocery, pure and simple. It has no explanatory merit.

2. Rationality and Optimality
Dawes actually thinks Sober is correct in some of his criticisms. It is surely unacceptable to dream up ad-hoc divine intentions on the basis of what we observe. We need to impose some independent constraints upon theistic explanations.

Where Dawes differs from Sober is in thinking that there are two plausible independent constraints on theistic explanations. The first of these comes from looking at intentional explanations as a whole; the second from looking at the specific nature of the divine agent.


a. Rationality
The first constraint comes from the "rationality principle". Whenever we use an intentional explanation we must assume that the agent is acting rationally. This means that we assume their actions flow from their beliefs, desires and intentions (BDIs).

To be more precise, we assume that the action they have chosen to perform is: (a) consistent with their BDI-complex; (b) efficacious, i.e. likely to attain their goal; and (c) efficient, i.e. requires the least expenditure of time and effort (given their beliefs).

To illustrate what this might mean in practice, Dawes uses Gould's example of the panda's thumb. The panda has five regular digits (like all mammals) and one strange bony protuberance that it uses to strip bamboo.

Gould famously argued that the Panda's thumb, and other functional oddities like it, were good arguments for the truth of evolution. Why? Because they were clearly cobbled-together solutions to selective pressures  necessitated by the Panda's convoluted ancestry. They were not the kind of solutions you would expect from an intelligent designer.

Sober disagrees with Gould's argument. Gould, he argues, is presuming we know what God would be inclined to do if he built pandas. We cannot make that presumption.

Dawes thinks Gould was right to argue as he did because in doing so he employed the rationality constraint. If we posit a particular goal such as "creating a panda that can strip leaves from bamboo", then we are surely right to point out that the means chosen was inefficient.

There are problems with Gould's approach. Foremost among them is that he never actually specifies what the relevant divine intention is. Why would God want to create a panda in the first place?


b. Optimality
The second constraint on theistic explanations arises from a the nature of the divine agent. God is no ordinary rational agent. He is omniscient, omnipotent and morally perfect. Consequently, he would adopt the most optimal means for achieving his goals.

To make this more explicit, Dawes lists the following qualities of divine agency, qualities that are missing for ordinary agents:


Taken together, Dawes argues that these qualities imply optimality. 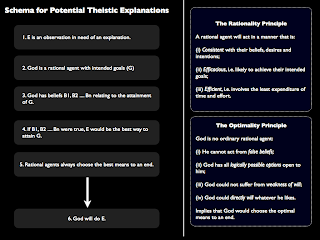 In the next entry we will look at the objections to this optimality principle.

* Note: I hope to be covering Sober's arguments in more depth on this blog at a later time.
Posted by John Danaher at 1:24 PM