What is a Cause? (Part 1) The Counterfactual Approach 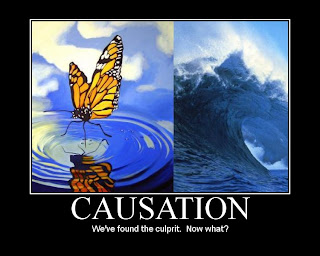 This post is part of my series on Steve Sloman's book Causal Models. For an index, see here.
Over the next two posts I will run through the concepts introduced and discussed in Chapter 3 of the book. The chapter offers a very basic counterfactual definition of causation and then mentions some problems with this definition.
To some extent the chapter is little more than a gentle warm-up, preparing the reader for the more detailed model of causation that follows in Chapters 4 and 5. That said, it offers a reasonably succinct introduction to some classic issues in the philosophy of causation.
Part One will set out the main features of the counterfactual definition; Part Two will cover the problem cases.
1. Event-Event Causation
Sloman begins by noting that the most common vocabulary of causation is that of event-event causation. In other words, in talking about causation most people are talking about how one event or state of affairs (smoking cigarettes) leads to another event or state of affairs (addiction or cancer).
There are more exotic forms of causation discussed in the literature. Perhaps most famously there is the notion of agent-causation. The idea here is that agents (or persons or souls if you like) cause events in a unique way. This idea is popular among some in the free will debate.
My own feeling is that there is no coherent concept of agent-causation, but one would need to swim through a sea of philosophical verbiage to make the point. There is no point in doing that here.
2. Experiments: Identifying Causes
After that brief introduction, Sloman moves on to consider how we identify causation. He does by noting the first law of psychology: correlation is not causation.
A correlational study merely identifies when two variables happen to go together. In this sense, a correlational study is merely descriptive: it has no deeper explanatory significance.
For example, a correlational study might find that those possessing two X chromosomes are more likely to have long hair. Does this mean that having two X chromosomes causes long-hairedness, or vice versa? Of course not, the fact that long-hair and two X chromosomes go together is likely the result of some third factor (cultural norms).
To work out whether one event causes another we need to do more than describe events; we need to perform an experiment.
The simplest form of experiment deals with two variables: an independent variable (IV) and the dependent variable (DV). We will have some hunch that there is a causal link between the IV and the DV. The goal of the experiment is to see whether this hunch is correct.
In the experiment, the value of the IV is manipulated and the change in the value of the DV is recorded. If the manipulation of the IV consistently results in a variation of the DV, we can infer a causal link. Although we should always be cautious in making such inferences. 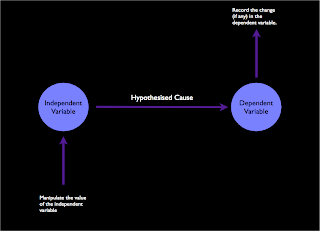 To give an example, suppose we wish to know whether punishing our children (e.g. taking away pocket money and/or grounding them) changes their behaviour. To do this we need to vary the amount of punishment and record the resulting changes (if any) in the behaviour.
Of course, good experimental design is more complicated than this example suggests. As Sloman notes, a good experiment must do two things:
3. Counterfactual Dependence
One important feature of the experimental method is its ability to compare two or more possible worlds. In one world the value of the IV and the DV are at one level, and in another world they are at a different level.
This is crucial because the most popular definition of causation is counterfactual in nature. So to infer causation, it is not enough to just say that one event follows or precedes another. You must also be able to say that, in another world, if the first event had not occurred then neither would the second. This is known as counterfactual dependence and is illustrated (poorly) below. 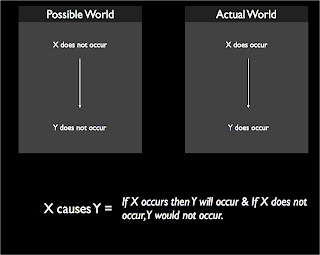 To sum up: a causal statement is not a mere description of the actual world; it is a statement about two (or more) possible worlds simultaneously.
That's enough for now. In the next post we will deal with one classic problem facing the counterfactual definition of causation.
Posted by John Danaher at 1:36 PM