Must Goodness be Independent of God? (Part 1): Solving the Euthyphro 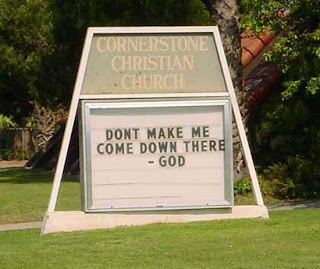 Over the next few entries I will be taking a look at that the following article:

In this article, Wes sets his sights on the attempts of William Lane Craig and William Alston to rescue theistic morality from the horns of the Euthyphro dilemma. As we shall see, Alston's attempt is more worthy of consideration than Craig's, but neither is quite successful.

But what are these moral prescriptions really? Are they the inane effusions of people who like to control others? Are they projections of our own predilections and biases? Do they have any deeper ontological grounding?

Most people would like it if morality had some deep ontological grounding. Indeed, if one examines most moral debates, one will usually discover that two things are demanded of moral prescriptions:

The question is whether any theory of morality can actually give us what we want? Theists think they have the answer.
2. What do Theists want from a Moral Theory?
Theists argue that God - the all-powerful, immaterial, personal creator of the universe - can provide our moral prescriptions with the deep ontological grounding we desire.

In particular, they argue that God's commands, which form the basis of our moral prescriptions, can pass the objective and motivational tests outlined above. After all, God's commands are clearly independent of our subjective whims and we should also be motivated to follow these commands. (Why? Well let's leave that to the side for now.)
Some theists would like to go a bit further with this. They would like to be able to say that morality is, in some sense, impossible without God and that God is sovereign over the domain of morality. Why would they like to do this? Simple: so they can use this as the basis for an argument for the existence of God.
These arguments will usually work from the "undeniable", "incontrovertible" existence of moral values, to the existence of God. A good example is William Lane Craig's moral argument. It runs as follows:
Could arguments like Craig's actually succeed? Well, that brings us to the third question.
3. Can Theists get what they want from a Moral Theory?
There is an infamous dilemma facing all divine command theories of morality. It is the Euthyphro dilemma, from the eponymously-titled Platonic dialogue.

Simply put, this dilemma asks the following questions: why are God's commands the source of morality? Is because they reflect some standard of moral goodness independent of God, or do they become good because they are God's commands?
There are two standard answers to this dilemma. We can call them the Ockhamist and the Platonist answers, respectively.
According to the Ockhamist, God's commands are good simply in virtue of the fact that he commands them. This is troubling because God is supposed to be omnipotent and could command anything: murder, rape, genocide, you name it.
And if he did issue such commands we would seem to have no reason to obey them. In other words, the Ockhamist answer fails the practical motivation test outlined above. Prudential reasons for following God's commands could be advanced -- eternal life anyone? -- but in advancing them we would be abandoning the idea that there are moral reasons to follow God's commands.
According to the Platonist, God's commands are good because they reflect some standard of goodness that is independent of his will. This is troubling for the theist because it sets up the possibility of having a morality that does not depend on God.
To see this possibility, we need to realise that for the Platonist the realm of moral goodness is wholly distinct from God. God, thanks to his omniscience, might have perfect knowledge of this realm and so might be able to communicate moral truths to his creation. But this would mean, at best, that God is pragmatically necessary for morality, not that he is metaphysically necessary.
These two positions are illustrated below. 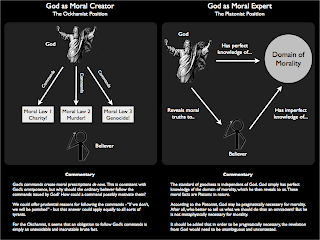 4. Alston and Craig to the Rescue
The Euthyphro raises a significant problem for the defender of theistic morality. Either they accept the arbitrariness and lack of motivational mojo that is implied by the Ockhamist, or they accept the divine irrelevance that is implied by the Platonist.
Either/or options like this are always philosophically circumspect. It could easily be the case that the Euthyphro is setting up a false dichotomy. Is there be a third option that does not impale itself on either horn of the dilemma?
Some theistic philosophers think there is and it is these philosophers that are addressed in Morriston's article. In particular, he takes a look at the arguments of Craig and Alston.
Both men try to collapse the two horns of the Euthyphro dilemma back into the being of God. They maintain that God's commands are good because (a) his attributes/nature is essentially good and (b) his existence is necessary for those attributes to come into existence.
We will look at Craig's argument in part 2 and Alston's in part 3.
Posted by John Danaher at 8:50 PM