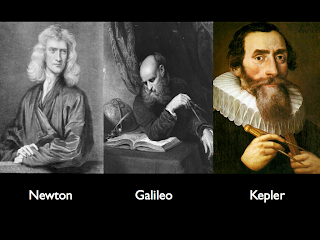 It's been awhile but I am finally writing about explanations again.

In this post I'll examine two basic explanatory qualities: breadth and depth. It is often said that a good explanation should have breadth and depth, but what does this mean? And is it really a good thing?


1. Explanations vs. Arguments
Before addressing the nature of these two concepts, let's backtrack for a moment and consider the differences between explanations and arguments.

An argument is an attempt to demonstrate or establish the truth of a particular proposition. It works from a set of premises to a conclusion. For example, let's say that you and I disagree about whether the best way to tackle an recession is through increased government expenditure (in the form of a "stimulus package") or cuts in government spending.

Let's say I'm in favour of the stimulus package. I want to get you to agree with the proposition "The stimulus package is the way to get the country out of recession". How can I do this? Well, I might present the following argument:

Now this may be a good or a bad argument. It does not matter. What does matter is that the argument is about establishing the truth of the concluding proposition.
This is to be contrasted with an explanation. An explanation begins with the truth of a proposition and then tries to identify the factors that account for the truth of that proposition.
Let's imagine that you and I are arguing once more about the economic woes of our country. Except this time our argument takes place a few years later and the country has indeed exited recession. We both agree on this fact. We now want to know: what accounts for this?
Suppose that in the interim period the government has in fact passed a stimulus package. I think that the stimulus package is the obvious explanation of our increasing prosperity. How could I convince you of this? Well, I would in fact present the exact same argument as I did when we were in recession. You will challenge this by presenting alternative explanations and we will assess these explanations in terms of their explanatory virtues.

In sum, an explanation works from an accepted proposition to a set of premises that would, if true, entail that proposition.
That is, roughly, the formal distinction between an explanation and an argument. In practice, the distinction counts for little. For example, although an explanation may be introduced in order to explain a particular proposition, the strength of the explanation may be established because it makes successful predictions about other propositions.
The predictions work a little bit like arguments, i.e. we accept the truthfulness of the explanation and try to see what would follow (deductively) from its truth.
2. Breadth and Depth
All of the above was an extended introduction to what I really wanted to talk about, which is the concepts of breadth and depth. I am going to use the relationship between the work of three giants of the scientific revolution to illustrate these concepts. They are Isaac Newton, Johannes Kepler and Galileo Galilei.
First, let's look at the concept of depth. Kepler, using the data gathered and compiled by Tycho Brahe, noticed something odd about the motions of the planets. He explained these oddities in terms of three laws of planetary motion. These laws suggested that the planets followed elliptical orbits around the sun.
Some years later, the deeply unpleasant Isaac Newton came along an showed how Kepler's elliptical orbits were themselves accounted for by his law of gravitational attraction. Newton laws were deeper than Kepler's.
You can think of depth in terms of the unending string of "why" questions:
The deeper the explanation, the more of these questions it can answer.
To look at the concept of breadth we need only add to the picture Galileo's laws concerning falling bodies here on earth. Again, Galileo took the behaviour of falling objects as his data and developed a set of laws that accounted for this behaviour. And again, Newton came along and showed how Galileo's laws were accounted for by his law of gravitation.
Thus, Newton's laws have breadth as well as depth: they explain both the motions of the planets and the motions of falling bodies.
Breadth is a function of how much data is covered by an explanation. It is linked to depth. As an explanation becomes deeper and more abstract, it covers more and more facts.
We can represent the breadth and depth of Newton's laws schematically as follows. 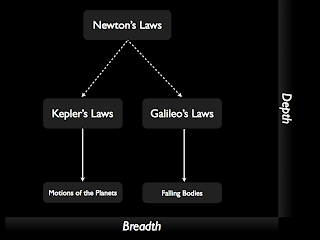 Although breadth and depth are counted as explanatory virtues, some caution is warranted. An explanation can be broad and deep and still be trivial; explaining everything and nothing.
We need more criteria.
Posted by John Danaher at 9:30 PM